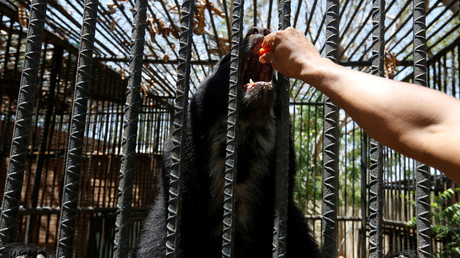 An Andean bear is the latest animal to become an overnight viral sensation after it joined a five-year-old boy in an impromptu spirited jumping session at Nashville Zoo.

Ian Parker was visiting the Peruvian exhibit at the zoo with his father Patrick when he spotted the bear in its enclosure, and drew up close to the wild beast.

Standing right up against the glass pane that was separating the pair, the boy began jumping up and down in excitement – only to be quickly imitated by the towering bear. The copycat bear, standing waist-deep in water, mirrored the boy’s actions in a jumping session that lasted some 10 minutes, according to Parker’s father.

The endearing moment has since become a viral hit, gathering almost a quarter of million views on Parker’s Facebook page at the time of writing.