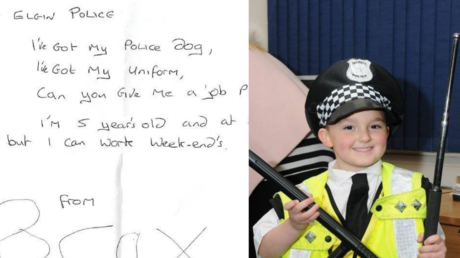 Scottish police shared a sweet note from a prospective young recruit who asked to work a weekend shift at the station during his time off from school.

Five-year-old Brax Walker wrote a letter to his local police station in Elgin, Scotland, informing them that he had his own K-9 and uniform, and was ready for duty. When he’s not in school, of course.

“I’ve got my police dog, I’ve got my uniform, can you give me a job please,” the young boy wrote. “I’m 5 years old and at school but I can work weekends. From Brax.”

While Brax was presumably too young to become a junior crime fighter, the boy was invited to the station for a tour around what could one day be his station. In a number of photos shared on the North East Police Division Facebook page, Brax can be seen donning a uniform, standing beside a police motorbike and posing with a police dog.

The post garnered plenty of positive attention, thousands of ‘likes’ and adoring comments from the public, who commended the officers on their handling of the young boy’s request and giving up their time to show him the ropes.

“Brilliant story and well done Elgin Police Station for taking the time out of your busy day to spend time with this young lad,” wrote one local.

“Well done. Exactly what community policing is all about and should be,” commented another.