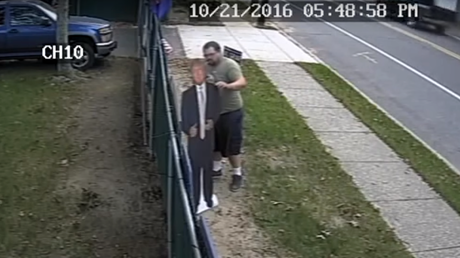 Police in Suffolk County, New York, are offering a $5,000 cash reward in return for information about the theft of a life-size cardboard cutout of Donald Trump.

The cardboard version of the Republican presidential candidate was taken from the yard of a home on Broadway in Holbrook on October 21, just before 6pm.

Suffolk County Crime Stoppers has released CCTV footage of the incident in the hope of arresting the Trump thief.

The video first shows a car stopping suspiciously close to the property before a man approaches the yard and appears to examine the cutout.

The man then unties the character from the fence before walking away – with a cardboard Trump in tow.

A police appeal for information along with clear images of the perpetrator (and the cutout) have been posted on Facebook, sparking some amusement online.

Other social media users argued over whether the culprit was a Democrat committing an act of sabotage or a fervent Trump supporter eager to possess his own version of the real estate mogul.