A Missouri state senator used a book by rapper 50 Cent during her Monday filibuster of a sales tax proposal that’s being pushed as a reaction to the US Justice Department’s report on police violence in Ferguson.

Senator Maria Chappelle-Nadal chose Fiddy’s self-help text The 50th Law to fill time while trying to block the ability of two mostly white suburban areas to raise sales taxes as much as 0.5 percent to boost salaries, equipment, and training for more than 1,000 county officers.

Two years on from the fatal shooting of unarmed black teenager Michael Brown by a white Ferguson police officer, Chappelle-Nadal said she won’t support the additional consumption tax, which disproportionately affects poor and middle class people, until policing concerns have been fixed.

“There are still practices in St. Louis County that are unfavorable,” she said. “I do not trust our current leadership whatsoever. The people I represent have no confidence in this leadership.”

The senator took to the streets of Ferguson following Brown’s death and was teargassed by police on multiple occasions.

“I felt violated in every single way,” she said after the event. 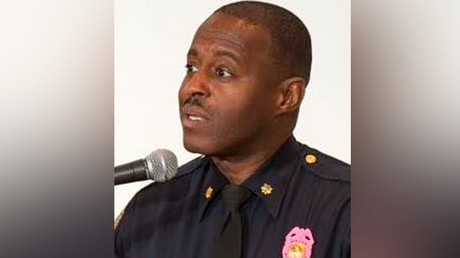 St Louis County Police Chief Jon Belmar previously told a House committee that if there had been two police officers in the car when Michael Brown was killed, he believes Brown would not have died.

“Two officers can do a job much more safely than one,” he said.

READ MORE: Beyond Ferguson – The reality of Black persecution & colonization in 2016

Senator Dave Schatz urged the senator to allow the legislation to move forward, saying voters could decide if they agreed with the tax structure, but when she refused, he removed the measure from the floor, bringing an end her 40-minute filibuster.

Later the same day, the state’s House of Representatives passed a similar bill, which goes to the Senate for a vote.

Brown was shot by police officer Darren Wilson in 2014. The grand jury found that the incident took 90 seconds, from Wilson seeing Brown until the final shot was fired.

Wilson shot at the 18 year old 12 times with seven shots hitting him.

The US Justice Department’s report about the shooting ruled that Ferguson police practices “are shaped by revenue rather than by public safety needs”, which both reflects and exacerbates “existing racial bias, including racial stereotypes.”

Racist emails sent by police and the use of arrest warrants to take money away from citizens, particularly those who are poor, were cited as examples of that bias.

The report also featured the story of an African-American woman who parked illegally and got hit with a fine and fees. She was later charged with failure to appear offenses, leading to an arrest warrant and new fines. The court refused to take payments until she had the full amount. She ended up spending six days in jail and paid more than $500, all for a parking violation.

Some 67 percent of African Americans accounted for up to 93 percent of arrests made between 2012 and 2014.

While Chappelle-Nadal’s 40 minute filibuster is believed to be the first featuring a 50 Cent book, it was relatively short compared to some of the longest ones in history.

Democratic presidential candidate Bernie Sanders gave an eight-and-a-half-hour filibuster in 2010 against the extension of Bush tax cuts, which he said benefited the wealthy.

He railed against Wall Street and the national debt, and read letters from constituents who were affected by the recession during his speech.

Kentucky Senator Rand Paul talked for close to 13 hours three years ago, speaking out against CIA director nominee John Brennan. Paul was attempting to draw attention to the Obama administration’s refusal to rule out the possibility of using drone strikes on US citizens, even though they already had as early as 2011.

At one stage, he asked if they would take out Vietnam war activist Jane Fonda.

Republican presidential candidate Ted Cruz is a filibuster fan. The self-proclaimed ‘outsider’ talked for more than 20 hours in 2013 to protest Obamacare.

Ashton Kutcher, White Castle burgers, and Duck Dynasty were all mentioned during the course of his speech. He even did an impression of Darth Vader.

The longest-ever filibuster came from South Carolina Senator Strom Thurmond in 1957 to block the Civil Rights Act. The segregationist politician talked for more than 24 hours to prevent passing the act.