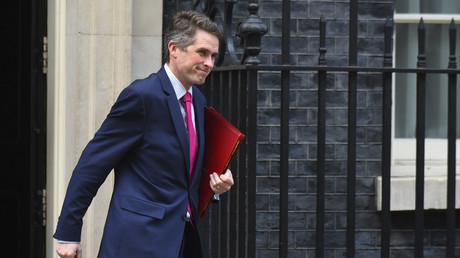 It’s been seven months since Gavin Williamson swapped the party whip for weapons and the British defence secretary has wasted little time in ramping up the jingoist rhetoric to secure more funds for his cash-strapped MoD.

After the announcement of a Ministry of Defence (MoD) spending review in January, fresh-in-the-job Gavin warned us that the Russians were asking: “How can we just cause so much pain to Britain?” He claimed that their nefarious plans could cause “thousands and thousands and thousands” of British deaths.

Backing his boss, Chief of the General Staff General Sir Nick Carter, followed that up in a speech. He said that Russia posed the most significant threat and that the UK would struggle to compete without a significant increase in defence spending.

And how were Russia to cause those deaths –  by plotting to cut underwater cables… by cyber-attack, or a missile or by undersea activity?

Speaking to the Daily Telegraph, Williamson said Russia was planning to cut energy cables and pipelines between the UK and the EU, with the James Bond-esque plot potentially coming via a cyber-attack, missile or undersea activity.

The defence secretary queried: “Why would they keep photographing and looking at power stations, why are they looking at the interconnectors that bring so much electricity and so much energy into our country?”

Energy experts, meanwhile, rubbished the claims. One told the Guardian that the lights were unlikely to go out if the electricity interconnectors, which supply about 5 percent of UK power, were somehow cut off, adding “It does sound a bit like scaremongering really.”

In the wake of the Salisbury poisoning, it was time for Williamson to give his first big speech since ascending to his role at the MoD. During the following Q&A, in a stunning piece of diplomacy, he said: “Russia should shut up! Russia should go away!”

Asked if Britain and Russia were entering a “new Cold War,” Williamson replied: “Relations ain’t good are they?”

Countering the ‘intensifying threats’ from space

Not the premise for a new ‘Independence Day’ movie, but the defence secretary did warn that Britain must be ready to counter “intensifying threats” from space while launching the MoD’s first Defence Space Strategy earlier this week

With the UK facing being kicked out of the EU’s Galileo satellite program, along with losing the €1.4 billion it already plowed into its development, Williamson suggested that the UK could start anew with its own €10 billion satellite.

“It is essential we protect our interests and assets from potential adversaries who seek to cause major disruption and do us harm,” he said, without specifying if he was referencing Russians or Martians.

READ MORE: 40 years after the Bahrainis kicked them out, the Royal Navy returns to the Gulf

DefConGav: More funds for frigates or we could go to nuclear war

Speaking at a recent naval conference at the Royal United Services Institute, Williamson called for more funds to invest in more big ticket defence items as a means of “conventional deterrence” rather than relying on “four nuclear bombs” – a reference to its Trident-equipped nuclear submarines.

“If we do not have that conventional deterrence, and the ability to deter from conventional forces, then what we’ll find ourselves in, is a place that none of us wish to be in, and having to turn to the greatest deterrence of them all.”