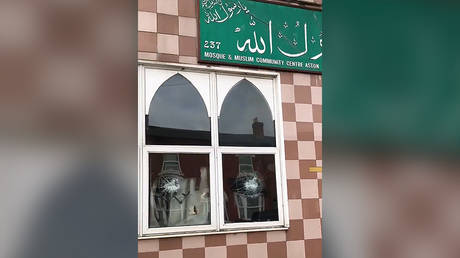 Mosques have been targeted in overnight attacks in Birmingham, police have confirmed. Counter-terrorism officers are investigating the incidents, but no motive has been attributed.

I have reports of a no of Islamic Centres & a Muslim girls school attacked overnight!

The systematic #Islamophobia by the MSM & @Conservatives are responsible for these disgusting attacks pic.twitter.com/ma2yVi5754

Unfortunately the Witton Road Islamic Centre was attacked overnight by an individual who used a sledgehammer to break the windows.

An initial attack was reported at a mosque on Birchfield Road 2.32am local time and, as officers were responding, additional reports were received of a man smashing windows at another mosque on Slade Road at approximately 3.14am local time.

Police were dispatched to patrol the streets citywide in an effort to prevent further destruction, and patrolling officers discovered damage at other places of worship in the Witton Road, Aston Broadway areas of the city.

This is Albert Road mosque (Jamia Masjid Ghousia) that was attacked overnight in the Aston part of Birmingham.

I am here with the trustees and @WMPolice .

I understand from locals 5 mosques were attacked overnight with sledgehammers.

A disgusting attack on places of worship!! pic.twitter.com/F1aoMiEHj8

Counter-terrorism detectives from Scotland Yard have been dispatched to investigate the incidents, which are believed to be linked.

“At the moment we don’t know the motive for last night’s attacks,” West Midlands Police Chief Constable Dave Thompson said in a statement.

“What I can say is that the force and the Counter-Terrorism Unit are working side-by-side to find whoever is responsible.”

Thompson added that since the Christchurch mosque attacks in which 50 Muslims were killed and a further 50 people injured, West Midlands police have been working closely with local community leaders to reassure local Muslims in the area.


Forensic teams are already examining each scene and police are gathering CCTV footage of the incidents in an attempt to track down the perpetrators.