Answering an open-ended question, 31% of Americans said Russia currently represents the “greatest danger” to the US, according to a new poll. It is the highest percentage of Americans expressing this sentiment in nearly three decades.

The new Pew Research Center survey also found that Russia is by far the number one national threat in the eyes of Democrats, as 39% named Russia as the greatest threat to America, while 21% cited North Korea, and 13% said it was China.

Opinions were divided among Republicans and Republican-leaning independents, with 27% saying North Korea presently poses the greatest danger to the US; 21% cited Russia, and 18% – Iran.

Compared with 2013, the last time the same question was asked, larger numbers in both parties cited Russia as posing the greatest danger to the US. Almost twice as many Democrats as Republicans now express a more hostile attitude (39% vs. 21%).

It is the first time that a significantly larger percentage of Democrats than Republicans has named one single country as representing the greatest threat to the US, the researchers noted. “Historically, the pattern has been reversed, with greater proportions of Republicans than Democrats naming one particular country as our greatest threat.”

The survey of 1,500 adults was conducted from April 5 to 11, before the recent rise in tensions with North Korea over its nuclear program and missile tests. 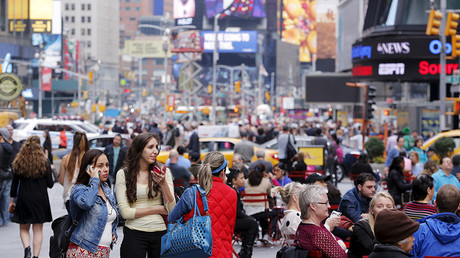 That survey also found that 38% of Democrats perceived Russia as an “adversary,” compared with 20% of Republicans.

The sloppiness of the alleged DNC hack by itself proves it was not organized by a nation state, and the “utter nonsense” presented as proof of Moscow’s involvement is rather evidence of intelligence agencies being “ignorant and naïve,” cybersecurity guru John McAfee told RT in January.

The so-called evidence of the Russian involvement in the hacks not only looks like “the most deceptive propaganda was perpetrated on the American public” but actually proves quite the opposite, McAfee added.

“There are four facts which they claim prove that Russia did this hack. It was utter nonsense. The information was number one – Russian language was found in the malware. Number two – a Cyrillic keyboard was used. The forensic science can now tell what type of keyboard was used to develop a piece of a malware,” McAfee told RT.