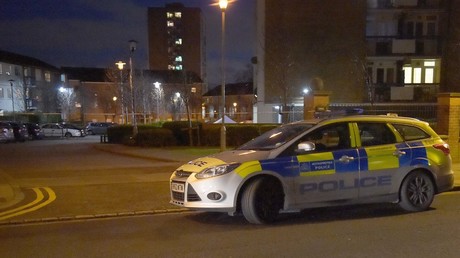 At least three people have reportedly been shot outside Kingsbury tube station in north London, according to police.

The shooting outside the metro station in North West London happened at around 9:45 pm local time, a spokesman for the Metropolitan Police said, noting that officers along with London Ambulance Service were sent to the scene.

“They found three people suffering injuries,” the spokesman said. Police are now looking for the suspect(s) in the shooting. Local roads and the tube station have been temporarily closed.

“There has been no arrest at this early stage,” police said.

Kingsbury: the @jubileeline station is closed while police carry out an investigation, outside the station.

London Underground tickets are being accepted on local bus services.

After an initial assessment of the crime scene, Met police said the incident is “not terror-related.” The three victims discovered at the scene of the crime are now getting medical treatment in a hospital. Their injuries are not life-threatening, the police added.

Monday night’s shooting comes amid the city’s crackdown on firearms in streets. London saw a 44 percent rise in homicides in 2017. From March 2017 to March 2018, 157 homicides were reported in the British capital. These numbers were accompanied by a 21 percent increase in knife crime and nearly 36 percent rise in robberies.