A Polish man has been arrested in Italy for kidnapping a 20-year-old British model for a $300,000 ransom. He threatened to otherwise sell her off to the highest bidder on the dark web should the money not be paid. The victim was drugged and kept handcuffed in an isolated hut outside Turin.

Italian State Police (Polizia di Stato) announced Saturday that they arrested Lukasz Pawel Herba, 30, a Polish citizen with a British residency permit, and charged him with “kidnapping for extortion purposes” of a British model who was lured into a fake photo shoot.

The unnamed 20-year-old victim arrived in the Lombardy capital on July 10 to participate in a photo shoot that was arranged through her agent. As soon as she entered the apartment located on Via Carlo Bianconi she was attacked by two men.

Herba and another unnamed accomplice drugged the victim with the horse tranquiliser ketamine, Italian media reported. The woman was then stripped and photographed. The attackers then stuffed their unconscious victim in a travel bag and drove her to an isolated hut outside Turin.

“The model was kept handcuffed to a bedroom wooden chest… until the morning of July 17, when she was released and accompanied to the British consulate in Milan,” police said in a statement.

The victim was released after the kidnappers allegedly found out that she had a 2-year-old child and agreed to reduce the ransom to $50,000. They reportedly claimed that selling off mothers in the sex trade contradicted their ‘code of ethics.’

The captors also threatened to kill her if she made the kidnapping public. 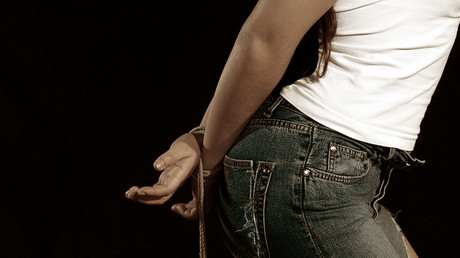 After being released, the victim reportedly told Corriere Della Sera that she was just one victim of a massive crime network. One of the captors revealed that “he alone had earned over 15 million euros in the last 5 years” through kidnapping and selling women, the model said.

“He explained that all the girls are destined for the Arab countries, and that when the buyer gets tired of the girl bought at the auction, he can give her to other people, and when he is no longer interested, she is served as a ‘tiger meal’,” the victim allegedly revealed.

The kidnappers initially tried to extort $300,000 in cryptocurrency from her agent for her safe release, otherwise threatening to sell the model through an online auction “to the best bidder on deep web pornographic sites.”

“During the kidnapping, the abductor, using encrypted accounts, asked the model’s agent a $300,000 redemption to stop the auction,” police said.

Authorities said the group might be linked to the ‘Black Death Group’, an organization which operates on the deep web as agents for several illegal traffickers. The group has previously come under Europol’s spotlight.

“Europol found traces of this group on the ‘dark web’ a couple of years ago,” the chief of the Milan branch of Italy’s state police, Lorenzo Bucossi, told the Daily Telegraph. “We don’t know if the accused is linked to an organization or created his own version of Black Death.”

“We can say the accused was about to create an auction online,” Bucossi added. “We have evidence he had contact with people who have kidnapped women in the past.” Further investigations are ongoing in Poland and the United Kingdom.