A £2.5 billion ($3.4bn) investment for Royal Navy submarines, just days after SNP politicians called such investments “a white elephant,” is to be announced by UK Defence Secretary Gavin Williamson on Monday.

Under the plan, £1.5 billion ($2bn) will be released to fund the construction of the service’s seventh and final Astute-class submarine, a nuclear-powered attack vessel of which three have already entered service.

Expected to be commissioned in 2024, the latest sub to enter construction will be called HMS Agincourt upon completion. 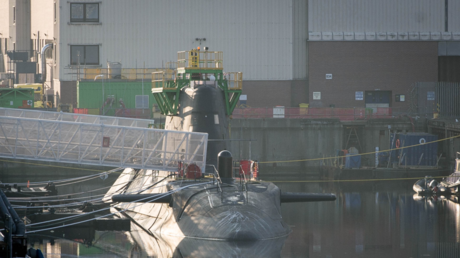 Agincourt was the site of a major victory for the English against the French in 1415 as part of the Hundred Years’ War. The conflict finally ended in French victory in 1453. The battle’s fame was supplemented by it’s inclusion in William Shakespeare’s play Henry V, in which the eponymous King rallies English troops with the famous ‘St. Crispin’s Day’ speech.

A further £960 million ($1.3bn) will go towards funding the second phase of construction for the UK’s Dreadnought-class submarines. Armed with nuclear ballistic missiles, a total of four Dreadnoughts will be built to act as the UK’s Trident nuclear deterrent at-sea.

The announcement is expected to be made by Williamson at defense giant BAE Systems’ shipyard in Barrow-in-Furness in Cumbria, where some 8,000 jobs are supported by programs like Trident. During his visit, he is set to unveil a plaque and officially open a new £100m ($135.5m) sub-construction building which will be used to outfit and test the submarines.

According to the Ministry of Defence (MoD), the latest round of funding will help to sustain thousands of jobs at the facility as well as jobs within the submarines’ supply chain. The BBC reports that Williamson will say the spend shows that government’s “unwavering commitment to keeping the UK safe and secure from intensifying threats.”

News of the latest funding comes just days after a Public Accounts Committee report described MoD spending plans as “unrealistic,” warning of a potential £20 billion ($27bn) funding gap could be caused by such big ticket programs that will take years to build.

One program that has come under particular scrutiny from anti-nuclear and disarmament campaigners has been the the Trident nuclear deterrent, which could cost as much as much as £167 billion ($227bn) over its 30-year lifespan. On Friday, SNP MP for Glasgow South Stewart McDonald accused former governments of burying “their heads in the sand” when it comes to defense procurement, blaming such spending deficiencies on programs like Trident.