Drug makers Pfizer and Allergan called off their $160 billion merger just two days after the US Treasury Department issued new rules to stop companies from moving overseas to avoid taxes.

President Barack Obama criticized corporations for trying to change their tax residencies overseas simply to avoid paying corporate taxes in the US in his speech on Tuesday. Pfizer had planned to move its headquarters to Ireland after buying Dublin-based Allergan, though it would keep its core management operations in America.

On Monday, the Treasury announced two rules intended to limit the relocation of US companies overseas for tax purposes, a process known as a tax “inversion.” One would reduce the ability of foreign business to become eligible for inversions by not counting recent purchases of US companies towards a deal. Another would limit a business’ ability to accept loans from their foreign parent companies and deduct interest payments on them in order to pay fewer taxes on profits from the US.

This practice of changing a tax residence while maintaining core operations in the US has been widely criticized by the Obama administration as well as presidential candidates like Hillary Clinton and Donald Trump for eroding the US tax base. The Pfizer-Allergan deal would have been the largest inversion ever.

“Pfizer approached this transaction from a position of strength and viewed the potential combination as an accelerator of existing strategies,” said Pfizer CEO Ian Read in a statement announcing the merger’s termination. “We remain focused on continuing to enhance the value of our innovative and established businesses.”

As a result of the deal’s failure, Pfizer will pay a $150 million breakup fee to Allergan. Pfizer will now choose whether to spin off its generic drug business into a separate entity, while Allergan said it will keep trying to “simplify” its operations, the Wall Street Journal reported.

Pfizer could have tried to tweak the merger details in order to get around the US Treasury’s new rules, but Reuters reported that the company was concerned this course of action would have simply generated more intense regulations from the federal government.

While the Treasury did not specifically single out the Pfizer-Allergan merger when announcing its new rules, one of them took aim at the way Allergan became an eligible inversion partner. The Treasury imposed a three-year limit on acquisitions of American companies by foreign businesses hoping to be part of an inversion deal. This meant that nearly $100 million worth of Allergan’s US acquisitions over the last three years – which ultimately inflated the company’s size and shrunk Pfizer’s ownership stake – did not count as part of the inversion process. 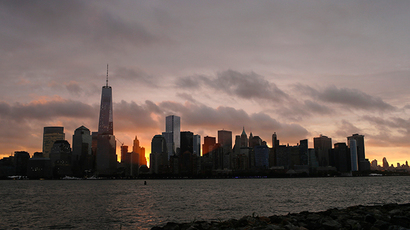 Under rules established by Congress, no inversion can take place if a company owns 60 percent or more of a foreign business. After Allergan’s multi-year buying spree, Pfizer’s ownership stake shrank to 56 percent.

Speaking on CNBC, Allergan CEO Brent Saunders argued the Treasury specifically targeted the merger with Pfizer when drafting its rules.

“It really looked like they did a very fine job of constructing a rule here — a temporary rule — to stop this deal, and obviously it was successful,” he said.

He also claimed the companies were within legal limits and that Allergan was surprised by the Treasury’s moves.

“For the rules to be changed after the game has started to be played is a bit un-American, but that’s the situation we’re in,” Saunders said.

“We built this deal around the law, the regulations, all the notices that were put out by the Treasury and it was a highly legal construct. We followed the rules that Congress had set for companies looking to move to foreign domicile.”

Saunders’ claim that the merger was legal would probably not be disputed by President Obama, who criticized “poorly designed” laws that allow corporations to take advantage of tax laws in ways that the average citizen cannot.

“A lot of it is legal, but that’s exactly the problem,” the president said on Tuesday. “Big corporations are playing by a different set of rules.”

Obama argued that tax avoidance is “a big, global problem” that needs to be addressed because it prevents governments from investing in things like education and infrastructure for its people. He also invoked the recently unveiled Panama Papers leak, which revealed offshore accounts and tax avoidance schemes involving numerous world leaders, companies, and businessmen from around the globe.