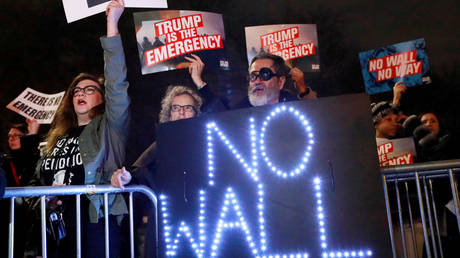 Sixteen US states have filed a joint lawsuit challenging President Donald Trump’s use of emergency powers to requisition billions of dollars to build his border wall as an unconstitutional violation of separation of powers.

The suit alleges that Trump does not have the constitutional powers to appropriate funds required to build the wall he so desperately wants to construct along the US’ southern border, since Congress – not the president – ultimately has control of spending. The plaintiffs have framed the issue as presidential overreach, and the suit proposes to “protect [plaintiff states’] residents, natural resources, and economic interests from President Donald J. Trump’s flagrant disregard of fundamental separation of powers principles engrained in the United States Constitution.”


“Contrary to the will of Congress, the President has used the pretext of a manufactured ‘crisis’ of unlawful immigration to declare a national emergency and redirect federal dollars appropriate for drug interdiction, military construction, and law enforcement initiatives toward building a wall on the United States – Mexico border,” the lawsuit, filed in the Federal District Court of San Francisco, reads.

The states’ alliance accuses Trump of steering the nation “toward a constitutional crisis of his own making.” Trump declared his intentions last week to cobble together the funding for his wall out of a $600 million Treasury Department asset forfeiture fund for “law enforcement priorities,” a $2.5 billion military fund for drug interdiction, and a $3.6 billion military construction fund.

California attorney general Xavier Becerra points out that Trump essentially shot himself in the foot while declaring the emergency when he said “I didn’t need to do this, but I’d rather do it much faster.”


Other states signing on to the suit include New York, Connecticut, Hawaii, Maryland, Minnesota, New Jersey, Oregon, Virginia, Colorado, Illinois, New Mexico, Michigan, Nevada, Delaware, and Maine – all Democrat-controlled, either through their governors, legislatures, attorneys general, or all three.

After reluctantly ending the longest-ever government shutdown at 35 days with no wall money in sight, Trump ignominiously settled for $1.38 billion in “border security” funding to avert a second government shutdown last week, far less than the $5.7 billion he initially sought to fund his wall. With the emergency money, he will have a total of $8 billion for the construction.