A 13-year-old student from Massillon, Ohio who shot himself in the head last week was initially planning a school shooting. Police have revealed evidence from the boy’s cellphone.

Jackson Middle School student Keith Simons, 13, was found dead in one of the school bathrooms with a semi-automatic rifle. The seventh-grader first left the bathroom with the .22 caliber weapon intending to begin his assault, but quickly changed his mind, went back inside, and turned the gun on himself.

Messages uncovered by authorities revealed that he admired Eric Harris and Dylan Klebold, the attackers from the Columbine High School massacre. They murdered 13 victims on April 20, 1999, before committing suicide.

A 7th-grader shot himself today inside Jackson Memorial Middle School in Ohio. I am heartbroken for the student, their family, & classmates.

If you’re a gun owner please do a better job of keeping your firearms in a safe & secure place.

Simons’ disturbing messages explained his motivations for carrying out the attack. “I’d hurt and destroy something bigger but my schools an easy target,” Simmons wrote in one of them.

“I want to leave a lasting impression on the world,” he stated. “I’m going to die doing it.” 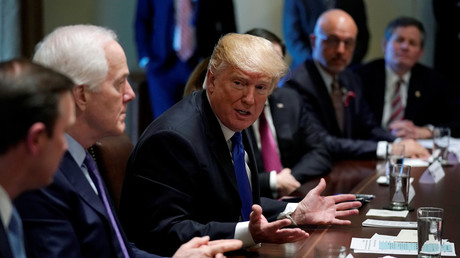 “We should thank God every day, whatever made him change his mind,” Jackson Township Police Chief Mark Brink said about Keith Simons’ unfulfilled plans

Fierce gun debates have erupted across the US with renewed force after the Parkland tragedy, with many still divided on how best to tackle the epidemic of gun violence. Additionally, tensions remain high after Florida lawmakers struck down a crucial gun reform bill after three minutes of debate and passed a resolution on pornography an hour later.

US president Donald Trump has come under intense scrutiny for not doing enough to reform gun laws. In response, he held a meeting Wednesday with over a dozen lawmakers, promising to outlaw “bump stocks” with an executive order by the end of the week. He urged lawmakers to combine their proposals into a single “beautiful” bill he could sign, and soon.