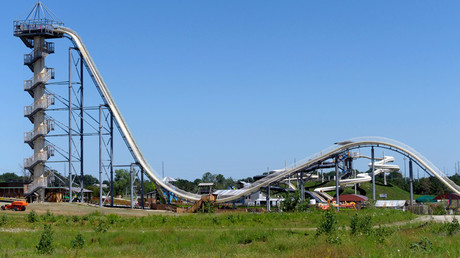 A 12-year-old boy was killed in an accident on the world’s tallest waterslide at Schlitterbahn Waterpark in Kansas City.

Police said they are investigating an accidental death case, but no further details have been released. Park spokesperson Winter Prosapio confirmed that the boy died on the Verruckt slide and that the park had been closed.

Officers working an apparent accident death investigation at Schlitterbahn. No other details at this time.

The Verruckt, which means ‘crazy’ in German, features a 169 foot drop at 65 mph.

The boy was visiting the park with his parents, according to Prosapio.

The park will remain closed on Monday. It is required by law to shut down in the wake of an accident resulting in serious injury.

The Verruckt slide opened in 2014 and is 17 storys high, with 264 steps leading up to the top. A conveyor belt glitch led to its opening being delayed three times. Several crash dummies were also ‘killed’ during testing, the Travel Channel’s Xtreme Waterparks reported at the time.