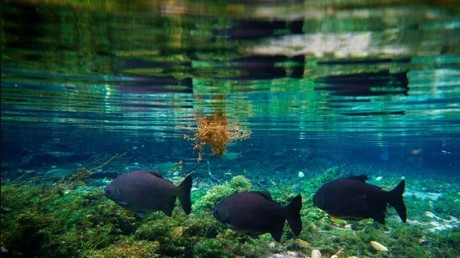 Oklahoma wildlife officials have warned fisher folk to be on the lookout for a relative of South America’s meat eating piranha predator, after an 11-year-old girl reeled in the toothie catch from Fort Cobb Lake.

Kennedy Smith, 11, was having fun by the lake with her grandmother Sandra Whaley when a tug on their fishing line signalled a big catch. However, when they pulled in their lake bounty from out from the water something didn’t feel quite right – the fish had massive jaws like a creature from a horror movie.

“I was confused because I knew that fish with teeth are not normal. It was weird. They were human-like and that made it even weirder,” Smith told the Associated Press.

Realising that the fish probably shouldn’t be in the Oklahoma lake, Kennedy Smith and her grandmother dropped it into the Oklahoma Department of Wildlife Conservation (ODWC) for examination, but not before the animal bit the young girl’s adult chaperone.

The fish was later found to be a pacu by a game warden, a relation of the South American piranha which is known to feed on meat. Sandra Whaley luckily did not receive serious injuries from the pacu’s teeth.

According to the United States Geological Survey, the pacu, or pirapatinga, has been observed in waters in 43 states since 1987. The fish is seen an invasive species not native to the US and is likely to have been introduced to some lakes and rivers by people discarding pets.

The fish is normally found in tropical locations like the Amazon River basins and the flora stripping creature can be distinguished from its meat-eating cousin, the piranha, by its less razor like, molariform jawline.

“If you happen to catch a pacu, or it seems your recent catch has swallowed a set of dentures we ask that you don’t throw it back. Remove it from the the reservoir and contact your local Game Warden and let them know,” the ODWC said in statement.