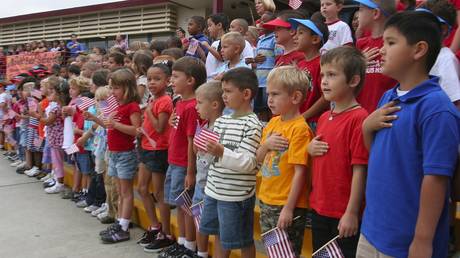 An 11-year-old boy was arrested in Florida after his refusal to stand for the Pledge of Allegiance escalated into an argument with his teacher, who called in security because she “did not want to continue dealing with him.”

The sixth-grade student at Lawton Chiles Middle Academy in Lakeland reportedly explained that he wasn’t standing for the pledge because he deemed the flag racist and the national anthem offensive to black people.

Also on rt.com
Cheerleaders who kneeled during anthem will return to the field on Veterans Day


According to a statement substitute teacher Ana Alvarez gave to the Polk School District, she then asked the boy, “Why if it was so bad here he did not go to another place to live?” After an exchange ensued with the boy, the teacher said she called the office because she “did not want to continue dealing with him,” Bay News 9 reports.

When the school resource officer arrived and asked the boy to leave, he initially refused and then “created another disturbance and made threats while he was escorted to the office,” the Lakeland Police Department said.


The child was arrested for refusing to follow multiple commands and being disruptive, allegedly threatening to beat the teacher and get the principal fired. However, his mother, Dhakira Talbot, disputes these claims, telling Bay News 9 the situation should have been “handled differently.”

Polk County Public Schools spokesman Kyle Kennedy said the student was not arrested for not participating in the pledge. The boy was taken to the Juvenile Assessment Center and charged with disrupting a school function and resisting an officer without violence. Meanwhile, the teacher was removed from the school district and an investigation is underway.