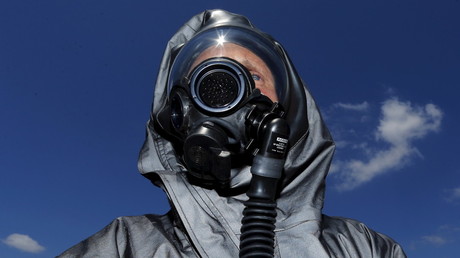 Eleven people became ill at a US military base in Arlington, Virginia, a short walk away from the Pentagon, after opening a suspicious letter. Three were taken to the hospital after a hazardous material situation was declared.

The Arlington Fire Department responded to a hazardous material call at Joint Base Myer–Henderson Hall at 4:30 p.m. local time. Fire crews and hazmat units rushed to the scene. Three people were taken to the hospital and are currently in a stable condition, Arlington County Fire Department reported on Twitter.

At least five people were displaying symptoms such as nose bleeds and itching after coming in contact with the substance, according to local news outlet ARLnow. The roads leading to the base have been sealed by police, it reported.

The base was evacuated as a precaution, a Marine official said, according to ABC News. The US Marine Corps reported on Twitter that “several Marines are receiving medical care as a result of this incident.” The response to the situation has been coordinated with the FBI, it said.

Base officials are coordinating with local HAZMAT teams and @FBI. Several
Marines are receiving medical care as a result of this incident. No additional details are available at this time as the investigation is ongoing.

A corporal, a gunnery sergeant and a colonel were among those who showed the symptoms, CNN reported. It is unclear who initially handled the letter or what substance was involved. The base hosts both civilian and military personnel.

Joint Base Myer–Henderson Hall is located just across the Arlington National Cemetery from the Pentagon, the seat of the US Department of Defense, just over a mile (about two kilometers) away.