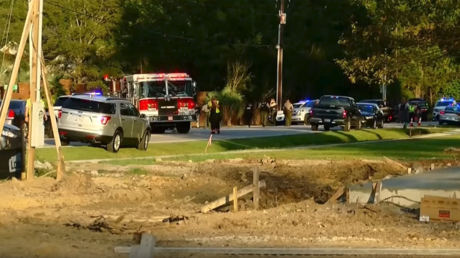 Two city police officers and three sheriff’s deputies have been wounded during an active shooter incident in Florence, South Carolina. The suspect has been apprehended, authorities said.

Florence County Sheriff’s Deputy Chief Glenn Kirby confirmed three of his deputies were among the injured, as well as two officers of the city police department. One of the injured officers has died, Florence County Coroner Keith von Lutcken, told WBTW-TV.

The active shooter emergency was declared just before 5 pm local time, and the authorities reported the capture of the suspect about an hour later. The nearby West Florence High School was locked down as a precaution.

A heavy police presence remains in the area, as the scene is being investigated.

No information was given about the condition of the wounded officers, the identity of the suspect, or the circumstances of the incident. Florence County Sheriff’s Deputy Chief Glenn Kirby confirmed three of his deputies were among the injured.

Florence is a city of approximately 40,000 residents at the junction of interstates 20 and 95, east of Columbia and north of Charleston

MULTIPLE OFFICERS SHOT: Active shooter incident developing in Florence, South Carolina, emergency management agency says: “We are advising everyone to stay away from this area.”pic.twitter.com/DEXPTxVfje