It seems like only yesterday that a lot of political journalists were spitting mad over the Snowden revelations. It was a very weird time.

Anyway, you don’t see so much of that anymore as some have remembered what their jobs are and others seem to have realized that they didn’t need to be so afraid of having information. But it hasn’t gone away completely. 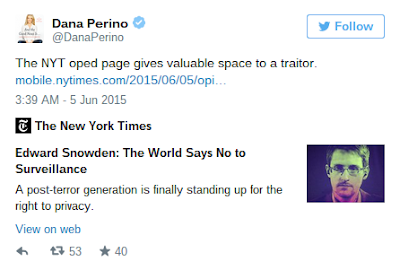 Of course, Dana Perino isn’t exactly a journalist. She’s a professional Republican. (I don’t suppose anyone noticed that the only Democrat who voted for the USA Freedom Act last week was Tammy Baldwin and that was because it didn’t go far enough. All those Republicans voted against it because it went too far. Just saying…)

Anyway, it’s interesting to see how the worm has turned.  Here’s how media beat reporter Eric Wemple put it in his blog at the Washington Post:

Dana Perino is the quite often levelheaded co-host on Fox News’s “The Five,” which figures among the favorite cable-news programs of the Erik Wemple Blog. She served as press secretary in the George W. Bush White House and recently wrote a book, “And the Good News Is…: Lessons and Advice from the Bright Side,” about her upbringing and her career in politics and media. In keeping with its title, the book treats the Bush administration and her boss, the president, in only the most flattering terms. It’s a tell-nothing volume.

Readers of “And the Good News Is” wouldn’t be surprised at what slithered out of Perino’s Twitter feed today.

That “valuable space” is an op-ed in which Edward Snowden takes something of a victory lap. The former contractor for the Central Intelligence Agency and the National Security Agency, Snowden is the famous figure who leaked documents used by journalists such as Glenn Greenwald, Laura Poitras and Bart Gellman starting in June 2013 to expose the wide-ranging U.S. surveillance state. One of the stories to emerge from Snowden’s leaks was a NSA program that collected bulk records of phone calls made in the United States.