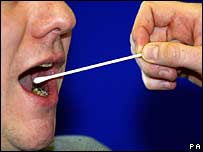 More than 100,000 people in Kent have been added to the DNA database in the last five years it has been revealed. According to figures released under the Freedom of Information Act, 103,830 samples were taken and more than a quarter were from people under 18.

All DNA collected is stored permanently on the national database.

“And of course it was very significant in the case of the M25 rapist a few years back,” he added.

Mr Croucher said the force was keen to ensure that it had “the best opportunity to be able to use DNA appropriately and to have DNA samples on record.

“So where the law’s allowed us to take those samples, we’ve taken them,” he said.

DNA collected ranges from people who voluntarily give police a swab in order to eliminate themselves from investigations, to convicted rapists and murderers.

Since 2004, the data of everyone arrested for a recordable offence in England and Wales – all but the most minor offences – has remained on the system regardless of their age, the seriousness of their alleged offence, and whether or not they were prosecuted.

Phil Booth, of the NO2ID campaign against identity cards, said: “This policy of putting on DNA samples and DNA profiles that shouldn’t necessarily be there is undermining the matching process itself.

“There’s the danger that someone may be fingered incorrectly, and it’s already beginning to happen.”