On the Friday before Russian Orthodox Easter, the Poroshenko-Yatsenyuk U.S-coup-installed Ukrainian Government attacks on all fronts on April 9th, to continue their extermination–campaign against the residents of the area, Donbass, that refuses to accept the coup-government that was installed by the U.S. when the Ukrainian President whom 90% of those residents had voted for was overthrown by the U.S. This bare-faced violation of the Merkel-Hollande-arranged Minsk truce would not happen without Obama’s approval. He is choosing to have this done on Russian holy days in order to intensify the provocation against Russia. Obama is thus going all-out now to provoke from Russia a sending-in of Russian army troops and air power in order for Obama to have a pretext to go to war against Russia, his real target “in order to defend an ally” (which has been trying to exterminate the residents in the area that won’t accept Obama’s imposed rule).

The following reposts from Fort Russ: 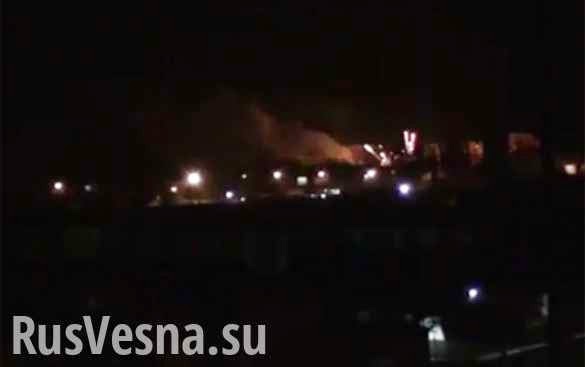 April 9, 2015
Translated by Kristina Rus
Based on reports from Rusvesna

“In general, we can say that the ceasefire is over – the entire front is under fire, including artillery. Shock troops of the enemy moved to the forefront.”

Shells are whistling again over the cities of Donbass. In Donetsk the sirens of ambulances and emergency services are heard. Under fire: Kievsky district, Oktyabrsky village, Panfilov mine village, Gladkova, Severny, Putilovka.

The entire evening of April 9 there was a battle in the village of Spartak and near Peski. The punishers used artillery guns, tanks, mortars, heavy barreled artillery. Under the cover of artillery, the enemy attempted to seize the positions of the militia in Spartak and near the airport. During the battle, this attempt was severely suppressed.

Also suddenly the positions of the militia near the town of Yasynovataya were attacked. There was a battle using small arms. To the West of Petrovsky district of Donetsk working mortars are also heard, as well as grenade launchers and heavy machine guns.

From the occupied Volnovakha Dokuchayevsk was fired on. The outskirts of the city are under a heavy fire of the enemy, the people are hiding in shelters fearing the assault on the city by the punishers, who have assembled the biggest formation in this area of about 8 thousand people.

According to a resident of Dokuchayevsk, “Locals demand that the militia do not leave them alone and hold positions at any cost, women are hysterically crying, saying that Ukrainians will go into the city and start a massacre. Older women bless the passing trucks with soldiers and pray for the victory and a speedy liberation to the district from the Ukrainian troops”.

Over Donetsk about a dozen enemy drones were spotted, one of which was shot down near the Lidiyevka mine.

The militia is put on full alert and is ready for a full-scale attack of the enemy.

On April 9, 2015 near Mariupol in Shirokino there was a fierce battle. There were dead and wounded among the militia and the Ukrainian occupation troops.

From several directions at the moment, the occupants are pulling the tank columns to Donetsk.

In particular, a few dozen tanks approached the airport from the direction of Marinka and Avdeevka.

For more on these events, see updates at http://fortruss.blogspot.com

Investigative historian Eric Zuesse is the author, most recently, of  They’re Not Even Close: The Democratic vs. Republican Economic Records, 1910-2010, and of CHRIST’S VENTRILOQUISTS: The Event that Created Christianity, and of Feudalism, Fascism, Libertarianism and Economics.