When we use the RADCON charts from the Nuclear Emergency Tracking Center, who compiles radiation levels in the US from approximately 300 monitoring sites, inevitably some moron points out it isn’t an “official” site, therefore waving away the the information, burying their head in the sand.

Newflash – The independent sites are the only ones that are monitoring and releasing the information people need to know so they can take countermeasures against the deadly radiation coming across the Pacific from the crippled Fukushima nuclear plant in Japan.

Lawrence Bragman, Fairfax City Council Member, Filmed by EON (The Ecological Options Network), Dec. 4, 2013, Via ENENews and in the video below. (Bragman’s comments start at approximately the 11 minute mark)

I did correspond with the Disaster Preparedness Office, locally, about any preventative measures – and the response was a resounding nothing.

I renewed my correspondence with them last week. I’ve yet to hear a response. […]

In the meantime, no one is monitoring radiation levels on the West Coast, and that is called for in this resolution. Government is not doing its job.

Then for those that believe the hype that the radioactive water being dumped into the Pacific by Fukushima will be so diluted that it won’t harm the West Coast, ignoring the sea life die-offs, the strange and “weird” behavior of the sea life along the west coast on the California coast and Canada, we have the ASR modeling of the radioactive seawater which completely contradicts those “official” assertions.

Government officials have stated that they are not sure whether the primary containment vessels have been breached. […] Officials continue to stress that contaminants will become diluted as currents carry them farther offshore. […] ASR modeling of the radioactive seawater tells a different story, cause for serious alarm. While these models do not estimate levels of radioactivity in the surrounding waters, the assumption that nearby currents will quickly dilute the radioactive material does not appear to be accurate. […] 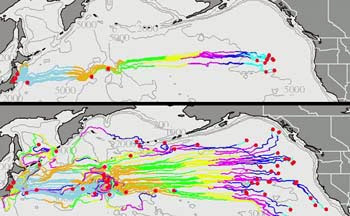