ALPENA MI – Eighteen years ago I sat in a wheelchair unable to read, write, or speak properly after two accidents that stole those abilities from me. Eight operations and countless hours of physical therapy later, I once again walk and talk, specializing in being a pain in the rear for liars in government and the mainstream media who would prefer the Truth to remain hidden.

I am the Devil’s worst nightmare; a man of principle who can’t be bought and fights for one thing: To save lives from the Satanic tyranny that is about to descend upon the entire world and win souls for Jesus Christ before it is too late.

The Tribulation has begun. The first five Trumpets of Revelation have already blown, the Sixth is sounding now as the War of Gog and Magog begins in Syria exactly as described in Ezekiel 38. The Seventh trumpet, the next to blow, will signal the Rapture. When that last Trumpet blows those who sleep in Christ will be caught up into the air first, but the Believers who are alive will meet them, and Christ, to be taken Home to await His Second Coming. 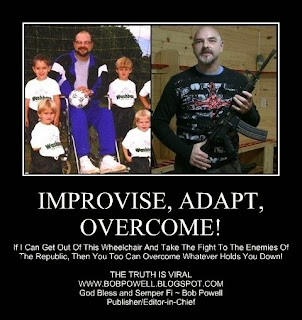 I believe that God has saved me, restoring my abilities to me at just the right time to be a Watchman tasked with warning His People before this final battle. I don’t, however, claim any supernatural powers. As of this writing I have never had a vision or a dream about coming events. All of my knowledge comes from a lifetime of study, and my pre-accident experience as an investigative journalist and network news anchor.

We will replace the diseased pablum the networks pass off as news with Truths gathered from all over the world, mined from sources you probably never knew existed, and refined through my patented BS filter. When it comes to gathering facts, and separating those facts from fiction and purposeful disinformation, The Truth Is Viral stands out from the crowd with an amazingly accurate track record. I was publishing the Truth about Obama’s CIA/al-Qaeda overthrow of Libyan leader Moammar Gadaffi two years before those same facts appeared as accepted truths in the so-called Mainstream Media.

Together, we will awaken more people than I ever dreamed imaginable. Beginning next week The Truth Is Viral goes live on the Guerrilla Media Network with a weekly 3 hour broadcast that has the potential of reaching millions of listeners every week. GMN is leading the way in the Alternative Media community and features many talented broadcasters including the inimitable Pete Santilli.

Here is my Editor’s Page over at the GMN, make sure to subscribe to that you don’t miss a single show: http://guerillamedianetwork.com/bobby/

Speaking of subscribing, make sure to subscribe to TTiV’s secondary channel where my GMN shows, and daily shorts, will be hosted. http://www.youtube.com/user/thetruthisviral

I intend to keep this channel open to host my investigative reports, but to keep as up-to-date as possible make sure that you subscribe to TTiV on both channels, on Facebook, and on Twitter as well as TTiV blows up the Internet (THAT should get the interest of the NSA – LOL.) You can also become a member of the free (in every way, including freedom of speech) TTiV Forum.

Additionally, The Truth Is Viral has advanced into Round Two of the Intuit Big Game contest. This competition relies heavily on voting to determine who will be the recipient of a 30-second commercial that will be played during the 2014 Super Bowl and your vote counts! You are, in fact, allowed to vote once a day; so remember to set a daily alarm on your phone or computer that will remind you to do just that.

You can cast your vote here: http://www.smallbusinessbiggame.com/MI/The-Truth-Is-Viral/381369

Finally, if you have the ability please donate to The Truth Is Viral today. As a “retired by disability” journalist I produce TTiV on whatever I can save from my disability check, and since I first started reporting an income of $200 a month with this show, I was penalized with a reduction in benefits of $600 and the loss of my Medicaid – despite chronic medical issues that continue to threaten my life, especially if they are left untreated.

It was hard to pay our bills before $600 in disability benefits and my medical insurance was taken away; it’s near impossible now. The cash alone made up one-third of our income. I was told matter-of-factually that if I gave up TTiV my benefits and my desperately needed insurance would be restored. I replied, “Screw that!”

I made a promise to my little girl, and to my God, that I would spread His Truth to anyone who would listen, that never again would I be ashamed of telling the Truth for fear of ridicule or being called a “religious nutter.” I will keep that promise by wearing a sandwich board if I must, but many more can be saved through publishing The Truth Is Viral. So if you have the ability to help me accomplish this mission, please donate today by clicking one of the Paypal buttons on the upper right of this page.

Even if you can not afford to donate, you can still support our mission to save lives and win souls for Christ by sharing this show with everyone you know, in every way you can think of. Share it on your Facebook timeline, then share it in your Facebook groups, then share it on Twitter, reddit, Orkut, or any one of the ten social media networks that open up in the share bar underneath the video on the Youtube watch page.

Most importantly, we need your prayers. My wife needs to be healed of her Stage 4 Colo-rectal/Liver cancer. Chemotherapy alone will not cure her, but prayer can! I know it can, I’ve seen it in action. I need the strength of the Holy Spirit to keep on fighting the good fight as I care for her at the same time. I can’t do all of this alone. I need your help.