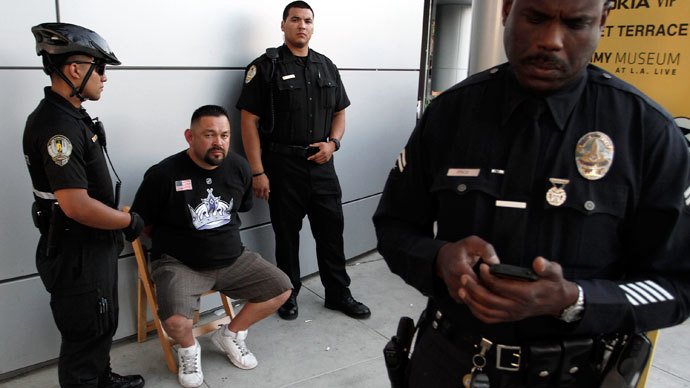 WASHINGTON, D.C. – Challenging the practice by police of routinely searching cell phones of individuals who have been arrested, The Rutherford Institute has asked the U.S. Supreme Court to declare these warrantless cell phone searches an unconstitutional violation of the Fourth Amendment’s prohibition on unreasonable searches and seizures. Insisting that cell phone digital data represents the equivalent of bookshelves of an individual’s papers and record, and that police should not be allowed to rummage through this highly personal information without a warrant, Rutherford Institute attorneys have asked the Court to recognize that cell phones store an extraordinary amount of personal and private information that has historically been accorded a high degree of protection from government intrusion.

“Cell phones hold a place of central importance in modern day life, in large part because they contain a variety of personal information that users can access on the go. While this may make life more convenient, it can also pose a serious threat to our individual privacy when our cell phones end up in the hands of government officials lacking the knowledge or scruples to abide by the Fourth Amendment’s prohibition on unreasonable searches and seizures,” said John W. Whitehead, president of The Rutherford Institute and author of A Government of Wolves: The Emerging American Police State. “The government has no business prying into Americans’ private affairs, whether that prying is done by way of physical searches of our cell phones, remotely through surveillance of our phone calls and internet activities, or by tracking our cell phone signals to gauge our whereabouts.”

The issue at the heart of United States v. Wurie arose out of an incident that took place in September 2007, when Boston police officers stopped Brima Wurie, a motorist they believed was engaging in a drug deal. Police arrested Wurie and transported him to a police station. At the police station, police took two cell phones and cash from Wurie’s person. Police opened the cell phone and accessed the call log, and based on this information became suspicious that Wurie resided at a house on Silver Street in Boston. After conducting a warrantless entry of the residence to secure it, police obtained a warrant to search the residence and discovered cocaine, marijuana, a firearm and cash. Wurie was charged with possession of cocaine with intent to distribute and possession of a firearm, but moved to suppress the evidence obtained as a result of the warrantless search of his cell phone, including the evidence seized at the Silver Street residence. Although the trial court denied Wurie’s request, the U.S. Court of Appeals for the First Circuit reversed that decision and ruled that the warrantless search of the cell phone was not justified.

In January 2014, the Supreme Court granted the government’s request to review the appeals court’s decision. In asking the Supreme Court to affirm the appellate court’s ruling, Rutherford Institute attorneys point out that while the Fourth Amendment allows police to search the person of an arrestee incident to the arrest, such searches must be strictly limited to the fundamental concerns of officer safety and preservation of evidence. Neither of these concerns warrant the routine search of an arrestee’s cell phone by police, and the legality of a cell phone search incident to an arrest must be judged on a case-by-case basis. Moreover, Institute attorneys point out that allowing cell phone searches incident to an arrest would open up a vast amount of personal information to police.

Affiliate attorneys Anand Agneshwar, Robert B. Sobelman, and Carl S. Nadler of Arnold & Porter, LLP, assisted The Rutherford Institute in advancing the arguments in the amicus brief before the Supreme Court.