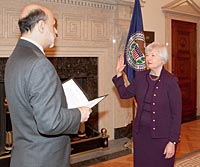 The unelected central planners at the Federal Reserve have decided that the time has come to slightly taper the amount of quantitative easing that it has been doing. On Wednesday, the Fed announced that monthly purchases of U.S. Treasury bonds will be reduced from $45 billion to $40 billion, and monthly purchases of mortgage-backed securities will be reduced from $35 billion to $30 billion. When this news came out, it sent shockwaves through financial markets all over the planet. But the truth is that not that much has really changed. The Federal Reserve will still be recklessly creating gigantic mountains of new money out of thin air and massively intervening in the financial marketplace. It will just be slightly less than before. However, this very well could represent a very important psychological turning point for investors. It is a signal that “the party is starting to end” and that the great bull market of the past four years is drawing to a close. So what is all of this going to mean for average Americans? The following are 8 ways that “the taper” is going to affect you and your family…

1. Interest Rates Are Going To Go Up

Following the announcement on Wednesday, the yield on 10 year U.S. Treasuries went up to 2.89% and even CNBC admitted that the taper is a “bad omen for bonds“. Thousands of other interest rates in our economy are directly affected by the 10 year rate, and so if that number climbs above 3 percent and stays there, that is going to be a sign that a significant slowdown of economic activity is ahead.

2. Home Sales Are Likely Going To Go Down

Mortgage rates are heavily influenced by the yield on 10 year U.S. Treasuries. Because the yield on 10 year U.S. Treasuries is now substantially higher than it was earlier this year, mortgage rates have also gone up. That is one of the reasons why the number of mortgage applications just hit a new 13 year low. And now if rates go even higher that is going to tighten things up even more. If your job is related to the housing industry in any way, you should be extremely concerned about what is coming in 2014.

3. Your Stocks Are Going To Go Down

Yes, I know that stocks skyrocketed today. The Dow closed at a new all-time record high, and I can’t really provide any rational explanation for why that happened. When the announcement was originally made, stocks initially sold off. But then they rebounded in a huge way and the Dow ended up close to 300 points.

A few months ago, when Fed Chairman Ben Bernanke just hinted that a taper might be coming soon, stocks fell like a rock. I have a feeling that the Fed orchestrated things this time around to make sure that the stock market would have a positive reaction to their news. But of course I absolutely cannot prove this at all. I hope someday we learn the truth about what actually happened on Wednesday afternoon. I have a feeling that there was some direct intervention in the markets shortly after the announcement was made and then the momentum algorithms took over from there.

In any event, what we do know is that when QE1 ended stocks fell dramatically and the same thing happened when QE2 ended. If you doubt this, just check out this chart.

Of course QE3 is not being ended, but this tapering sends a signal to investors that the days of “easy money” are over and that we have reached the peak of the market.

And if you are at the peak of the market, what is the logical thing to do?

But in order to sell, you are going to need to have buyers.

And who is going to want to buy stocks when there is no upside left?

4. The Money In Your Bank Account Is Constantly Being Devalued

When a new dollar is created, the value of each existing dollar that you hold goes down. And thanks to the Federal Reserve, the pace of money creation in this country has gone exponential in recent years. Just check out what has been happening to M1. It has nearly doubled since the financial crisis of 2008… 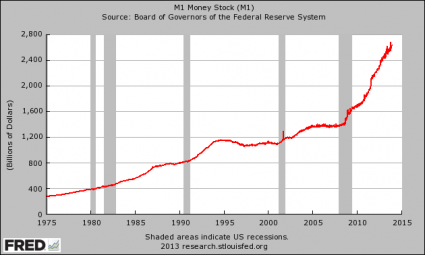 The Federal Reserve has been behaving like the Weimar Republic, and this tapering does not change that very much. Even with this tapering, the Fed is still going to be creating money out of thin air at an absolutely insane rate.

And for those that insist that what the Federal Reserve is doing is “working”, it is important to remember that the crazy money printing that the Weimar Republic did worked for them for a little while too before ending in complete and utter disaster.

5. Quantitative Easing Has Been Causing The Cost Of Living To Rise

The Federal Reserve insists that we are in a time of “low inflation”, but anyone that goes to the grocery store or that pays bills on a regular basis knows what a lie that is. The truth is that if the inflation rate was still calculated the same way that it was back when Jimmy Carter was president, the official rate of inflation would be somewhere between 8 and 10 percent today.

6. Quantitative Easing Did Not Reduce Unemployment And Tapering Won’t Either

The Federal Reserve actually first began engaging in quantitative easing back in late 2008. As you can see from the chart below, the percentage of Americans that are actually working is lower today than it was back then… 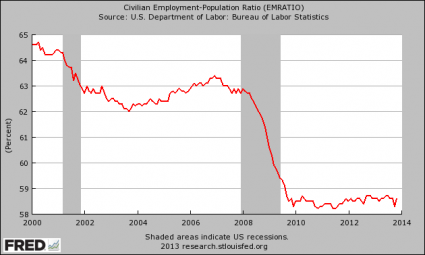 The mainstream media continues to insist that quantitative easing was all about “stimulating the economy” and that it is now okay to cut back on quantitative easing because “unemployment has gone down”. Hopefully you can see that what the mainstream media has been telling you has been a massive lie. According to the government’s own numbers, the percentage of Americans with a job has stayed at a remarkably depressed level since the end of 2010. Anyone that tries to tell you that we have had an “employment recovery” is either very ignorant or is flat out lying to you.

7. The Rest Of The World Is Going To Continue To Lose Faith In Our Financial System

Everyone else around the world has been watching the Federal Reserve recklessly create hundreds of billions of dollars out of thin air and use it to monetize staggering amounts of government debt. They have been warning us to stop doing this, but the Fed has been slow to listen.

If the rest of the world decides to move away from the U.S. dollar and U.S. debt because of the incredibly reckless behavior of the Federal Reserve, we are going to be in a massive amount of trouble. Our current economic prosperity greatly depends upon everyone else using our dollars as the reserve currency of the world and lending trillions of dollars back to us at ultra-low interest rates.

And there are signs that this is already starting to happen. In fact, China recently announced that they are going to quit stockpiling more U.S. dollars. This is one of the reasons why the Fed felt forced to do something on Wednesday.

But what the Fed did was not nearly enough. It is still going to be creating $75 billion out of thin air every single month, and the rest of the world is going to continue to lose more faith in our system the longer this continues.

8. The Economy As A Whole Is Going To Continue To Get Even Worse

Despite more than four years of unprecedented money printing by the Federal Reserve, the overall U.S. economy has continued to decline. If you doubt this, please see my previous article entitled “37 Reasons Why ‘The Economic Recovery Of 2013’ Is A Giant Lie“.

And no matter what the Fed does now, our decline will continue. The tragic downfall of small cities such as Salisbury, North Carolina are perfect examples of what is happening to our country as a whole…

During the three-year period ending in 2009, Salisbury’s poverty rate of 16% was about 3% higher than the national rate. In the following three-year period between 2010 and 2012, the city’s poverty rate was approaching 30%. Salisbury has traditionally relied heavily on the manufacturing sector, particularly textiles and fabrics. In recent decades, however, manufacturing activity has declined significantly and continues to do so. Between 2010 and 2012, manufacturing jobs in Salisbury – as a percent of the workforce – shrank from 15.5% to 8.3%.

But the truth is that you don’t have to travel far to see evidence of our economic demise for yourself. All you have to do is to go down to the local shopping mall. Sears has experienced sales declines for 27 quarters in a row, and at this point Sears is a dead man walking. The following is from a recent article by Wolf Richter…

Despite that glorious track record, and no discernible turnaround, the junk-rated company has had no trouble hoodwinking lenders into handing it a $1 billion loan that matures in 2018, to pay off an older loan that would have matured two years earlier.

And J.C. Penney is suffering a similar fate. According to Richter, the company has lost a staggering 1.6 billion dollars over the course of the last year…

Then there’s J.C. Penney. Sales plunged 27% over the last three years. It lost over $1.6 billion over the last four quarters. It installed a revolving door for CEOs. It desperately needed to raise capital; it was bleeding cash, and its suppliers and landlords had already bitten their fingernails to the quick. So the latest new CEO, namely its former old CEO Myron Ullman, set out to extract more money from the system, borrowing $1.75 billion and raising $785 million in a stock sale at the end of September that became infamous the day he pulled it off.

So don’t believe the hype.

The economy is getting worse, not better.

Quantitative easing did not “rescue the economy”, but it sure has made our long-term problems a whole lot worse.

And this “tapering” is not a sign of better things to come. Rather, it is a sign that the bubble of false prosperity that we have been enjoying for the past few years is beginning to end.