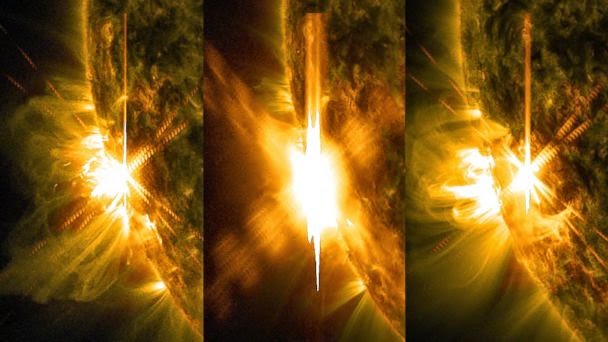 Three massive solar flares have been recorded, with reports of aircraft communications and military radio in Europe being disrupted, and an expectation of a possible huge magnetic shockwave which could hit Earth on Friday the 13th of June, 2014.

According to Mail Online this shockwave “could knock out mobile phone satellites and GPS communications.”

A ‘coronal mass ejection’ (CME), a huge cloud of irradiated particles and a magnetic shockwave, could strike the planet on Friday, damaging satellites and knocking out communications.

The three solar flares already caused brief disruptions to high frequency communications, such as radio broadcasts and aircraft communications, when they struck yesterday and twice on Tuesday.

The flares were captured by NASA and released on YouTube on June 10, after the first two solar flares, before the third which was released on Wednesday, June 11, 2014.


Video of the first two events below by NASA Goddard.