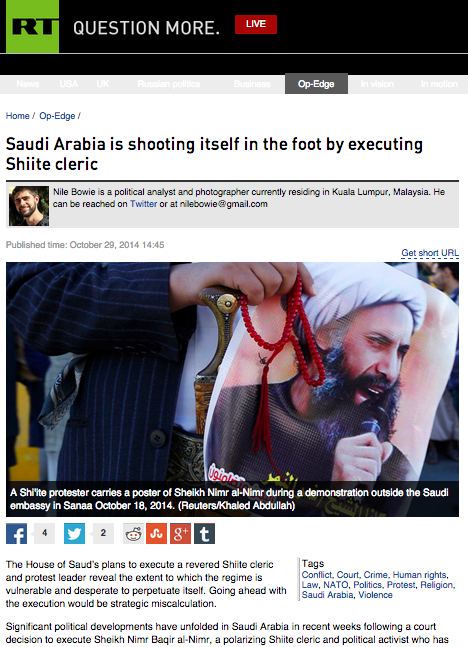 The House of Saud’s plans to execute a revered Shiite cleric and protest leader reveal the extent to which the regime is vulnerable and desperate to perpetuate itself. Going ahead with the execution would be strategic miscalculation.

Significant political developments have unfolded in Saudi Arabia in recent weeks following a court decision to execute Sheikh Nimr Baqir al-Nimr, a polarizing Shiite cleric and political activist who has campaigned for civil equality, an inclusive socio-political system, women’s rights, minority rights, and the release of political prisoners. Prosecutors condemned the cleric to death by beheading as punishment for charges of sedition, though the execution date has not yet been set.

Sheikh Nimr has been the fiercest critic of the Kingdom’s absolute Sunni monarchy for the last decade, but gained a considerable public following after leading a series of protests in 2011 in opposition to the Saudi military’s violent intervention and suppression of the pro-democracy movement in neighboring Bahrain, a satellite state with a Shiite majority ruled by a heavy-handed Sunni dynasty. His sermons and political activism continually emphasized non-violent resistance.

The Kingdom’s decision to sentence Nimr to death has complex implications that will push sectarian tensions to fever pitch inside Saudi Arabia and throughout the region, dangerously sharpening tension with Iran. Prominent clerics in Iran and Bahrain, as well as Shiite militant groups such as Hezbollah of Lebanon and the Houthi movement of Yemen, have all condemned the verdict and warned the Kingdom not to proceed with the execution.