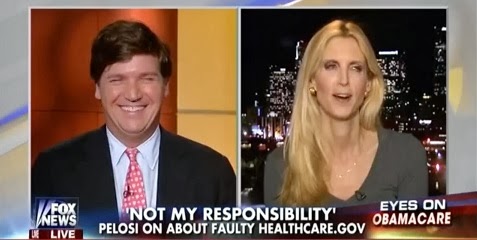 We have a twofer this morning folks!

In the beginning of the clip from Fox and Friends below, we see House minority leader Nancy Pelosi responding to a question on the failures of the Obamacare roll out by first saying she doesn’t know how the problems being seen with the Obamacare website have happened, and then uttering the unbelievable words when asked HOW can she not know, “It’s not my responsibility.”

This is the woman that single handedly jammed Obamacare through the House of Representatives, telling members of her own party they should be willing to “sacrifice” their jobs by voting for it, telling Americans the bill had to be passed in order to “see what is in it,” and she claims now it isn’t her responsibility???!!???

The second part of the video clip covers yet another person who was booted off their insurance plan after their carrier pulled out of California because of Obamacare and died because they did not have health insurance coverage, when they did have it before Obamacare’s mandates kicked in.

I guess to Pelosi these type of deaths just aren’t her responsibility either.