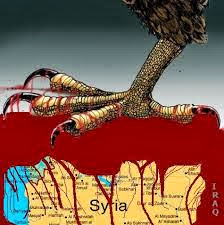 Somewhere in Washington, a conversation may have taken place along these lines: How are we going to sell this one to a public that is sick of war and sick of being lied to? The response is given: Don’t worry, we can bank on people’s ignorance, play to their emotions and just keep on lying – about the whole policy of attacking Syria being open to debate, about Assad having used chemical weapons (CWs) and about how this whole conflict resulted from a mass uprising by the Syrian people themselves. The script was thus set.
In an attempt to play the global audience for fools, while attending the G20 meeting in St Petersburg Barak Obama stood in front of the TV cameras and read from the script. He told the world how Uncle Sam should stand up and act against Assad for using CWs and killing 1,400 people, of whom 400 were children. He tried to appear adamant, however, that debate and consultation should take precedence before military action against Assad prevails.
Referring to paralysis over Syria in the UN Security Council, Obama went on to say that when the US can work internationally it should, but sometimes people look to the US and ask when are ‘you’ going to act. The US is a big country and people expect us to act, according to Obama; so a limited strike should be the responsibility of the US.
Based on this reasoning, the US government has the right to bypass the UN as and when it deems necessary.
Obama was asked despite the majority of the US public not wanting US military involvement in Syria (over and above what the US has already been doing there, which most remain blissfully ignorant of), how could he sanction it? He batted away such concerns by saying that his job is to convince the ‘American people’ that it’s the right thing to do; ultimately, however, ‘America’s interests’ will determine policy and will determine his decision.
Based on this reasoning, the US government has the right to ignore public opinion as and when it deems necessary.
Those of us already paying attention will already know just where those interests lie. ‘America’s interests’ (aka corporate-financial interests) do not coincide with the interests of the vast bulk of the ‘American people’.
But this is the type of word play, emotional blackmail and double speak you get on these occasions. Wrap things up in patriotism, use some bogus notion of ‘America’, nationhood and the ‘national interest’ and, as any adperson worth their salt may tell you, you can get those poor saps out there to buy into almost anything. That’s what military-industrial America has always relied on. And that’s the game it seeks to play now over Syria.
Whether it was justifying brutality, murder and mayhem in Vietnam, Guatemala or elsewhere with reference to the communist bogeyman, or doing the same now in Libya, Syria or Afghanistan with reference to ‘fighting terrorism’ or ‘humanitarianism’, selling the lie has always worked well to a greater or lesser extent.
Even if it fails to work this time around, a debate may be granted, but the outcome will be the same. Obama virtually admitted it in Russia:

“You listen to your constituents and then you act in terms of what you consider to be in America’s interests.”

The world’s self-appointed policeman
In an attempt to justify attacking Syria, ignoring public opinion and bypassing the UN, Obama stated that ‘the world’ is always telling the US to act against wrong doers. But, apart from imploring the US to hold Israel’s crimes to account, is this really true?
Are China, Iran, Cuba, Venezuela, Russia and India always asking the US to take action against the US’s concocted, delusional ever-changing list of ‘wrong doers’? Over 40 percent of the global population live in those countries. Factor in many other countries and people residing in the West who did not want the US to act as far as Iraq, Libya or Afghanistan were concerned, and the numbers (and thus the logic) begin to look pretty shaky for Obama.
But who needs numbers or global opinion on your side when simple fear mongering will do? Obama says that not to act will lead the ‘international community’ towards a slippery slope of inaction and mayhem to be  inflicted by will on us by failed states and rogue regimes. Therefore, a limited military response should take place, which would serve as a message, a strong deterrent, for the Assads of the world never to carry out atrocities again.
Of course, since 9/11, a slippery slope has already been in motion for quite a while — and it is the US that is on it, with its militarism, destabilisations and bypassing of the UN and international law.
According to Obama, the ‘American people’ – presumably the overwhelming majority who disagree with military action – do not properly understand that hitting Assad would keep all of us safe, including the people of Jordan, Israel and Lebanon as well as other countries in the immediate vicinity of Syria.
Obama stated:

“I cannot honestly claim his (Assad’s) use poses an immediate, direct threat…”