(RINF / LD) – An Asian state aggressively expanding its military, bullying its neighbors, illegally fortifying islands, and bent on regional, then global domination – sound familiar? Are you thinking it’s China 2015? No, it is Japan 1937-1944.

So shockingly similar is American propaganda regarding Japan during World War II to the propaganda being leveled against Beijing today that it seems almost intentional. Or perhaps those on Wall Street and Washington think so little of the general public’s ability to discern fact from fiction, they see no reason to revise the script and are going ahead with a remake faithful to the original with only a few minor casting twists.

This US government production is titled “Why We Fight: A Series of Seven Information Films” with this particular part titled, “The Battle of China” released in 1944.

It describes Japan almost verbatim as how the US today describes China. China is depicted as a righteous victim – but as the film elaborates – it is clear that any affinity shown toward the Chinese people is only due to the fact that the US held significant economic and geopolitical interests there. Admittedly, the US military was already occupying China after extorting through “gunboat diplomacy” concessions from China’s subjugated, servile government – not unlike US troops occupying Japan today, hosted by a capitulating government in Tokyo.

Japan in the film is depicted as a “blood crazed” race of barbarians, while the Chinese are depicted as noble resistors. Of course, this narrative shifted immediately as soon as US interests were ousted from China and US troops began occupying and shaping the destiny of conquered Japan after the war.

The Warning Then are Warnings Now

US Marine Corps General Smedley Butler in his book “War is a Racket” would specifically warn about a military build up aimed at Japan for the jealous preservation of American conquests in Asia Pacific. Speaking specifically about these conquests, General Butler would say:

What does the “open door” policy to China mean to us? Our trade with China is about $90,000,000 a year. Or the Philippine Islands? We have spent about $600,000,000 in the Philippines in thirty-five years and we (our bankers and industrialists and speculators) have private investments there of less than $200,000,000.

Then, to save that China trade of about $90,000,000, or to protect these private investments of less than $200,000,000 in the Philippines, we would be all stirred up to hate Japan and go to war — a war that might well cost us tens of billions of dollars, hundreds of thousands of lives of Americans, and many more hundreds of thousands of physically maimed and mentally unbalanced men.

Of course, for this loss, there would be a compensating profit — fortunes would be made. Millions and billions of dollars would be piled up. By a few. Munitions makers. Bankers. Ship builders. Manufacturers. Meat packers. Speculators. They would fare well.

Yes, they are getting ready for another war. Why shouldn’t they? It pays high dividends.

Of provoking Japan, he would state specifically that:

At each session of Congress the question of further naval appropriations comes up. The swivel-chair admirals of Washington (and there are always a lot of them) are very adroit lobbyists. And they are smart. They don’t shout that “We need a lot of battleships to war on this nation or that nation.” Oh no. First of all, they let it be known that America is menaced by a great naval power. Almost any day, these admirals will tell you, the great fleet of this supposed enemy will strike suddenly and annihilate 125,000,000 people. Just like that. Then they begin to cry for a larger navy. For what? To fight the enemy? Oh my, no. Oh, no. For defense purposes only.

Then, incidentally, they announce maneuvers in the Pacific. For defense. Uh, huh.

The Japanese, a proud people, of course will be pleased beyond expression to see the United States fleet so close to Nippon’s shores. Even as pleased as would be the residents of California were they to dimly discern through the morning mist, the Japanese fleet playing at war games off Los Angeles.

Incidentally, General Butler’s warning of provoking war to fulfill the ambitions of lobbyists in Washington and to protect America’s ill-gotten holding in Asia Pacific, would come to full and devastating fruition.

Today, a similar scenario plays out verbatim. The US seeks to expand its military in Asia Pacific to preserve what US policy makers call “US primacy over Asia,” and has been intentionally provoking China, by flying, sailing, and otherwise maneuvering just at the edge of Chinese territory. 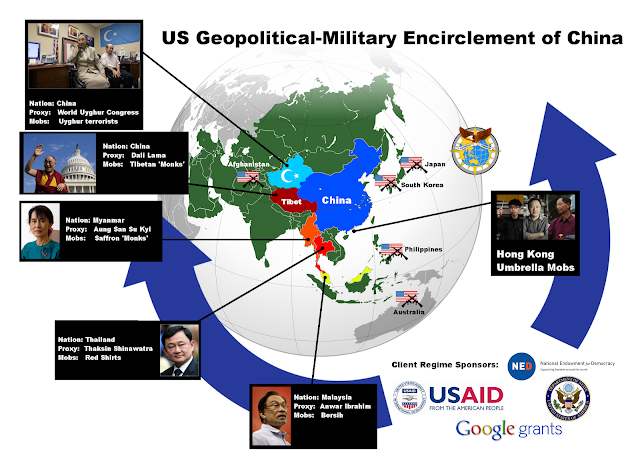 In addition they have attempted to encircle China with military bases from South Korea and Japan to as far south as Darwin, Australia, and as far west as Afghanistan, all while attempting to carve off Chinese territory in the Xinjiang and Tibet regions, destabilize Hong Kong, and stitching together Southeast Asia into an supranational bloc with which to isolate and threaten China with economically and militarily. Political subversion underwritten by the US State Department is ongoing in Xinjiang through the use ofUyghur terrorists, Tibet via the Dali Lama, Myanmar via Aung San Suu Kyi and her “Saffron monks,”Thailand through the Shinawatra family and their ultra-violent “red shirt” mobs, Malaysia via Anwar Ibrahim and his Bersih street movement, and Hong Kong via the so-called “Umbrella revolution.”

Despite this effort, American designs are failing, and China has likely learned many lessons before, during, and after World War II. Asian nations who seek regional peace and stability as well as cooperation with Beijing, have also learned much about the inner-working of US hegemony and how to confound it.

Beijing is unlikely to exhibit the hubris and impatience of the Japanese in World War II, or allow themselves to be provoked into an unwinnable war. Beijing is also well aware that as impressive as America’s grand strategy of geopolitically and militarily encircling China may be, it is failing on all fronts.

China has learned these lessons of history, and by examining history ourselves, we can see how the US provoked, then framed the war with Japan during World War II, and how it is using precisely the same tricks today against China.