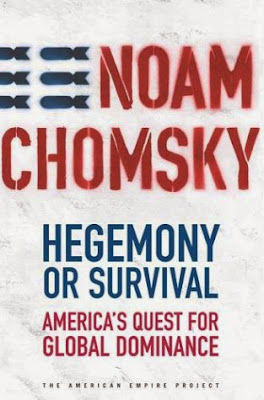 Back in 1992, the academic Francis Fukuyama mistakenly informed the world that, with the apparent triumph of western capitalism and the downfall of the , we had arrived at the end of history, the end of ideology. Fast forward a couple of decades and in 2011 Hilary Clinton announced the  was at war. She wasn’t talking about the ’s ongoing illegal invasions, occupations and mass slaughters, as if that wasn’t enough, but an ideological war for the hearts and minds of the global community.
While the likes of Voice of America were aggressively assertive during the Cold War,  was lamenting the fact that, since then,  global ideological influence had weakened, especially with the advent of the internet as well as new kids on the block gaining influence, such as Russia Today.
Of course,  too has been a long-time cheerleader of the ‘great myth’: the propagator of the  as the beacon of freedom, as the flagship of democratic ideals. The great ‘American Lie’ of the great ‘American Dream’ whereby the individual can somehow miraculously overcome adversity and make it in life, just as long as s/he keeps his or her nose to the grind. No actual chains required. The suffocating clasp of popular culture will suffice. The ‘self-made man’ syndrome rammed down the collective throat by , which magics away into thin air the debilitating effects of class-based structural inequalities (1). As the commentator and comedian once stated: “The American Dream, you have to be asleep to believe it.”(2)
And let’s not forget Uncle Sam the movie star, the liberator of the oppressed, the protector of universal good, the sweeper of its mass terror and atrocities away from the screen and conveniently under the carpet.

Enter some balance. Enter the internet, Press TV, RT and the ‘alternative media’. The media landscape has been transformed. In recent years, the US

has had to face up to the harsh truth that it cannot dominate the global debate to the extent it once did when it comes to shaping the analysis and reporting of news through its compliant media outlets.
Trying to keep the lid on things
Two years on from Clinton voicing her concerns about the US struggle to win the info wars, Edward Snowden has revealed what many of us had already strongly suspected – that people and foreign governments, including allies and the EU (3), are being heavily monitored by the US government. Before Snowden became public enemy number one, the  had set out to curtail WikiLeaks’ voice by shutting down its access to finance, notably by initially applying pressure on PayPal and MasterCard.

state-corporate machine did almost everything in its power to curtail WikeLeaks’ influence. Most debilitating of all was the shutting down of WikiLeaks’ access to finance, notably via PayPal, MasterCard, the Swiss bank PostFinance, Moneybookers, Bank of America and Visa Inc.

Bank of America was accused as being especially strident in attempting to discredit and shut down WikiLeaks with various dirty tricks, including backing a smear campaign that involved the use of false documents, disinformation, and sabotage (4).

These actions along with demands that Snowden be ‘handed over’ by the countries the  has been caught red handed of spying on, come as little surprise. The  deems fit to break international laws with impunity, yet bleats about about legalities where Snowden is concerned. Such high-mindedness. But this is par for the course. Successive  administrations have shown a strong dislike of proper democracy, legalities or open debate, whether at home or abroad, and have done everything to stifle it or bomb it out of existence (5).

In exposing state-corporate secrets and challenging powerful institutions, Assange made many enemies in high places. US Attorney General Eric Holder has said that Assange put the lives of US citizens at risk by leaking diplomatic cables. Dick Cheney calls Snowden a ‘traitor’. Who are the real ‘traitors’? If anyone has placed US lives at risk or has attacked the rights and freedoms of US citizens, it’s not Assange. People like Holder and Dick ‘Halliburton’ Cheney should look at their own actions and unbridled support for and benefits accrued from the robber baron regime they are part of and which they seek to legtimise and protect (6)(7).

The hegemony of an empire in decline
Central to this whole debate is the struggle to maintain hegemony, which involves the dominant class attempting to legitimize its position in the eyes of the ruled over — a kind of ‘consented coercion’ that disguises the iron fist of power. If state violence and outright oppression is to be avoided, people’s consent must be achieved via ‘ideological state-corporate apparatuses’, including the mass media. Former CIA boss General Petraeus is on record as saying  strategy is to conduct a war of perceptions continuously through the news media. According to the recently deceased journalist Michael Hastings, Petraeus was a master of duplicity and expert in manipulating the media and thus public perception (8).
We therefore don’t have to imagine much that the prevailing view of world conveyed through the mainstream media and swallowed by many people is based on ‘a pack of lies’ carefully presented by men like Petraeus, Cheney, Rumsfeld and the rest to try to gloss over their corruption and sanctioning of mass killing and plunder. British MP George Galloway’s powerful performance in front of a US Senate committee in 2005 highlighted it as such (9).
These days, despite state-corporate control and manipulation of the mainstream media, many see through the charade of today’s ‘liberal democracy’ and the ‘pack of lies’ which underpin it. The more the US lacks control over ‘the message’, the more it has to resort to violence and restrictions on freedoms. The more paranoid it becomes, the more penetrating and widespread the surveillance and ‘information gathering’ is. It is the type of insecurity that derives from an empire in decline. It is the type of oppression that derives from an empire that is ideologically and militarily fighting for its continued existence (10).
Notes
1) http://www.psychologytoday.com/blog/wired-success/201209/the-myth-social-mobility-and-the-self-made-man-in-america
2) http://www.youtube.com/watch?v=acLW1vFO-2Q
3) http://www.guardian.co.uk/world/2013/jun/30/nsa-spying-europe-claims-us-eu-trade
4) http://www.independent.co.uk/news/world/americas/the-us-bank-and-the-secret-plan-to-destroy-wikileaks-2215059.html
5) http://www.whale.to/b/blum6.html
6) http://www.globalresearch.ca/the-cias-hollywood-release-zero-dark-thirty-or-how-people-lose-their-humanity/5318368
7) http://www.informationclearinghouse.info/article4068.htm
8) http://www.buzzfeed.com/mhastings/the-sins-of-general-david-petraeus
9) http://www.youtube.com/watch?v=tkUu9-PEJpE
10) http://www.globalresearch.ca/the-us-will-continue-its-wars-as-long-as-the-dollar-remains-a-reserve-currency/5306003