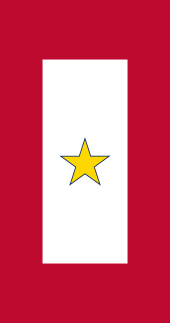 I am always surprised when I encounter people who have no idea what the Gold Star symbolises.  Go here for an article from 2011 that explains the Gold Stars: A symbol of Sacrifice.

Now it is announced that during the upcoming Super Bowl, there will be a PSA ad.

LOS ANGELES, Jan. 23, 2014 /PRNewswire/ — During the 2014 Super Bowl on Feb. 2, 2014, Orange-County based production company, Aperture Films, will debut their first Public Service Announcement (PSA) advertisement to build awareness about the Army’s Gold Star Pin Program & Survivor Outreach Services. Aperture Films produced three spots, which include over 40 Army survivors from across the country that came to Southern California to participate in the PSA film shoot.

Although established by an Act of Congress in 1967, the Gold Star Pins are still widely unrecognized. The Gold Star Pin is composed of a gold star on a purple background and is issued to immediate family members of service members killed in combat. The Next of Kin pin is composed of a gold star on a gold background and signifies a service-related death or suicide during active duty other than combat.
The filming took place at multiple locations in Orange County, as well as at the National Cemetery in Los Angeles. The three spots consist of a combination of documentary-style interviews and narrative stories featuring real survivors.
“Many people just don’t know what Gold Star Pins are even though their history dates to World War I. We’ve been working for almost year to bring these extraordinary real stories of sacrifice to the American public,” said Joshua Colover, Director and CEO at Aperture Films.
Aperture Films is honored to help tell the important story of the Gold Star Pins and the family members who wear them.

About Survivor Outreach Services
Survivor Outreach Services (SOS) is an Army-wide program that provides dedicated and comprehensive support services to survivors of deceased Soldiers. Established in October, 2008 its mission is to build a unified support program that embraces and reassures survivors that they are linked to the Army family for as long as they desire.
www.sos.army.mil