Glenn Beck begins by discussing the much-discussed Obama selfie picture, something Michael Savage referred to as Obama acting like a teenage girl, but he had not seen the photo yet, then they show it to him and we get to see Becks utter and total disgust, disdain and contempt for what he is seeing as he trashes Obama for his actions.

I have to agree with Beck… disgusting. 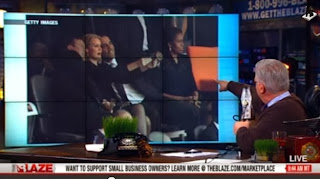