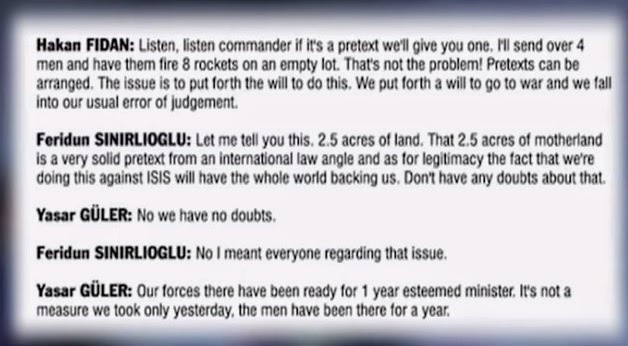 While alternative media has been all over this bombshell, the mainstream media has been accused of downplaying it, but in the new video release by The Corbett Report, the leaked recording of high level Turkish officials discussing a false flag attack to be blamed on Syria in order to start a war is discussed as it fills in the blanks and explains what we haven’t been told by the MSM.

Transcript link and video detail synopsis will be quoted below the video.

Late last week, a conversation between high-ranking Turkish officials was leaked online purporting to expose a plan that had been devised to use a staged attack on a Turkish target in Aleppo as a pretext to start a war with Syria. Where does this recording come from? Who released it and why? What does this mean for the future of Turkish politics and the future of the Syrian war? Join us this week on the BoilingFrogsPost.com Eyeopener report as we explore these questions and get to the bottom of the false flag leak.