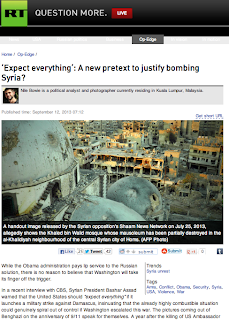 While the Obama administration pays lip service to the Russian solution, there is no reason to believe that Washington will take its finger off the trigger. In a recent interview with CBS, Syrian President Bashar Assad warned that the United States should “expect everything” if it launches a military strike against Damascus, insinuating that the already highly combustible situation could genuinely spiral out of control if Washington escalated this war. The pictures coming out of Benghazi on the anniversary of 9/11 speak for themselves. A year after the killing of US Ambassador Chris Stevens, who was one of the principle coordinators of arms to the Libyan rebels (many of whom are now fighting in Syria on the side of the US), instability ensues in a chaotic post-regime change Libya. In the words of Hilary Clinton reflecting on last year’s attack, “How could this happen, how could this happen in a country we helped liberate?” It’s an easy question to answer — it happened as a result of unthinkably destructive and illegal US foreign policy that materially enabled terrorist groups to overthrow a government that Washington didn’t like.

The Obama administration clearly hasn’t learned its lesson, but as bombs rip through the Libyan city of Benghazi two years in a row, it’s going to be even harder for Obama to sell this war not only to the public, but to his own government. Round two of Benghazi blowback raises numerous questions — we’re supposed to believe Washington’s intelligence that it knew Assad planned to use chemical weapons 3 days in advance and that its totally secret evidence, which it won’t reveal to anybody, is solid. It seems that US intelligence agencies are only adept at finding “evidence” that is amenable to their strategic foreign policy objectives, meanwhile they are totally incompetent when it comes to preventing terrorist attacks, from Benghazi to Boston. The Russian solution has succeed in getting warmonger Obama to backpedal on his bombs-for-peace proposal for the time being, even so, one should also “expect everything” from the rabid Washington regime that has poured enormous financial and diplomatic resources into bombing Syria and toppling Assad. In other words, expect a new pretext.