Thousands of years ago the ancient Sumerians engraved images of our solar system into clay, exhibiting knowledge seemingly way too advanced for a Bronze Age civilization; including knowledge of “The Destroyer” as they called it, a heavenly body that swings past the Earth every few thousand years causing calamity, catastrophe, and mass death.

Nibiru is supposed to be the home of a race of aliens/fallen angels called the Annunaki, and according to Sumerian legends as translated by the late Zechariah Sitchin they created a slave race (modern humans) to mine gold for them. 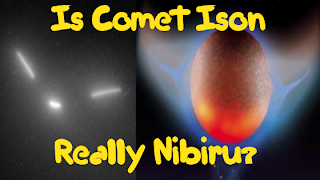 Recent telescopic images of Comet ISON appear to match the ancient descriptions of Nibiru, “The Destroyer,” and it is scheduled to make its closest passage to Earth just before Christmas 2013. On this episode of The Truth Is Viral, Biblical scholar Steve Fletcher makes an astonishing claim; that Comet ISON is the “Sign of the coming of the Son of Man” and that before ISON passes from view, the Church will be Raptured.

Valid eschatological theories have been set forth by extremely knowledgeable Biblical scholars for both the Pre-Tribulation and Post-Tribulation/Pre-Wrath Rapture scenarios; but they can’t both be right. It is the editorial position of The Truth Is Viral that we should pray for a Pre-Tribulation Rapture, but we should also prepare to survive in a world hostile to Christianity as if there will be no Rapture at all.

Further, it is not dogma that will save Humanity, but rather Faith that the blood of Jesus Christ has already paid the price for the sins of the world, and the realization that all individual human beings need to do to obtain Salvation is to acknowledge that sacrifice and accept Christ as their personal Savior.

It is important to note here that Fletcher is not setting a specific date for the Rapture, acknowledging that “no man knows the day or the hour, not even the Angels in Heaven, but the Father alone.” While Fletcher does say that the Rapture will occur sometime between now and Christmas, he says that Comet ISON is only the “sign” of Christ’s coming.

Also, the comparison between images of Comet ISON and Nibiru was brought forth during this interview by TTiV Publisher and Editor-in-Chief Bobby Powell and not Steve Fletcher, who says in the interview that he had not made that connection.

The Truth Is Viral and Publisher/Editor-in-Chief Bobby Powell does not necessarily endorse Steve Fletcher’s theory that the Rapture will occur before Christmas. We simply present this information for your consideration. We PRAY that Fletcher is right, but remember; we should repent of our sins and be prepared to go Home right now, and we should also prepare to survive in case there will be no Rapture at all. Are you willing to stake the safety of your family based on someone else’s interpretation of Scripture?

In any case, everything is about to change. Get ready.