Using secondary roads and traveling only at night, truckers from more than a dozen four truck convoys have made their way from the west coast to Camp Grayling in Michigan’s Lower Peninsula where they unloaded their cargo: More than 100 Mine Resistant Ambush Protected vehicles – MRAPs.

This information was first brought to the attention of The Truth Is Viral by a high-ranking officer in Michigan’s Law Enforcement community., so its provenance is impeccable. This officer introduced TTiV Publisher and Editor-in-Chief Bobby Powell to a truck driver, a mutual friend, with direct knowledge of these convoys. According to the truck driver interviewed in this episode of The Truth Is Viral, the MRAPs delivered to Camp Grayling – long suspected of being a major FEMA camp – were clearly marked with United Nations insignia.

The truck driver says that these MRAPs are parked in a gravel parking lot on the southeast side of Camp Grayling along a secondary road, and not on the base itself. Should anyone be out with their camera taking pictures or video of the beautiful Fall foliage that Michigan has to offer, and happens to run across these vehicles, please send your pictures and footage to Bobby Powell at the TTiV Facebook page.

These MRAPs are reported to be stored in an area viewable to the public, so nobody needs to go snooping around Camp Grayling. Please make sure that you do not enter any military or Federal installation without permission, no pictures or video are worth being incarcerated over. 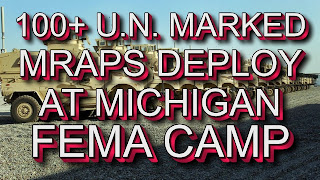