One of the issues most vexing to Pakistan is the ongoing missile strikes by US unmanned Predator drones, or UAVs, into Pakistan’s tribal areas.
Since 1 September, there have been at least 17 of these strikes and, while US officials say al-Qaeda leaders are being successfully targeted, local tribesmen say scores of civilians have been killed.

Look at this picture. 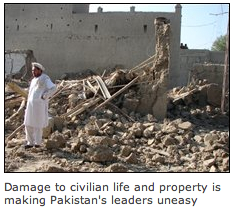 Notice anything strange about it?

It shows the result of illegal US bombing of Pakistan, via robot drones. It shows one of many building destroyed in 17 separate such terrorist attacks. And the words under the picture read:

Now, imagine a picture of the 7/7 London bombings. Visualise the carnage and imagine a subtitle saying, “Damage to civilian life and property is making Britain’s leaders uneasy.”

Our leaders weren’t “uneasy,” they were, as any sane person would be, angry and outraged. British people were murdered by an act of terror. Our media, rightly, was horrified by the attacks.

But, apparently, when Pakistanis get killed by 17 US missile attacks, that doesn’t warrant the same outrage. Instead, the whole of the article I quote sees the death of innocent Pakistanis as an unfortunate side-effect of the USA’s commendable pursuit of al-Qaeda. The article worries, not about the loss of civilian life but how effective the attacks are!

There is no outrage at the innocent Pakistanis killed by missiles fired by US drone planes. None whatsoever.

Our media is so in the pocket of the US, so in thrall to its holy crusade against whoever-it-pleases that normal morality goes out of the window. And the article hints, without any proof, that Pakistan’s leaders probably secretly okayed the attacks.

So that’s okay then. After all, if our government agreed to let us be bombed and killed by a foreign nation, that would make our deaths totally un-important too, wouldn’t it?

If you think I’m over-reacting, please just do this. Replace the countries in the article and see if it still makes any sense. How about:

“Britain launched 17 missile attacks on rural areas of Ireland, killing scores of civilians. But they were successful in killing two IRA leaders.”