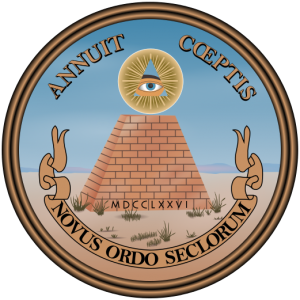 Are the big banks really as powerful as some people say that they are? Do they really control the global economy? If y0u asked most people, they would tell you that governments control the global economy. But the campaigns of our politicians are funded by the ultra-wealthy, the big banks and the large corporations that they control. Others would tell you that the Federal Reserve and the rest of the central banks around the world control the global economy. But the truth is that the Federal Reserve was established by the bankers and for the benefit of the bankers. As you will see below, at the very core of the global economy there exists a “super-entity” of financial institutions that control an almost unimaginable amount of wealth and power. These financial institutions and the ultra-wealthy individuals behind them are really the ones that are pulling all the strings. In this world money equals power, and the borrower is the servant of the lender. When you follow the pyramid all the way to the top, it begins to become very clear who really is in control.

In business schools all over America today, instead of dreaming of starting new businesses and contributing something positive to society, most business students are dreaming of going to Wall Street and getting rich. But Wall Street doesn’t actually create or build anything of value for society. Instead, the bankers make most of their profits by essentially pushing money and paper around. In a recent article, Chris Martenson commented on this…

Today, some of the most celebrated individuals and institutions are ensconced within the financial industry; in banks, hedge funds, and private equity firms. Which is odd because none of these firms or individuals actually make anything, which society might point to as additive to our living standards. Instead, these financial magicians harvest value from the rest of society that has to work hard to produce real things of real value.

While the work they do is quite sophisticated and takes a lot of skill, very few of these firms direct capital to new efforts, new products, and new innovations. Instead they either trade in the secondary markets for equities, bonds, derivatives, and the like, which perform the ‘service’ of moving paper from one location to another while generating ‘profits.’ Or, in the case of banks, they create money out of thin air and lend it out — at interest of course.

But just because they aren’t adding much value to society does not mean that these big banks are not extremely powerful. In fact, anyone that underestimates that power of these monolithic financial institutions is being quite foolish.

A team of researchers at the Swiss Federal Institute of Technology in Zurich studied the relationships between 37 million companies and investors worldwide, and what they found was absolutely stunning.

When the team further untangled the web of ownership, it found much of it tracked back to a “super-entity” of 147 even more tightly knit companies – all of their ownership was held by other members of the super-entity – that controlled 40 per cent of the total wealth in the network. “In effect, less than 1 per cent of the companies were able to control 40 per cent of the entire network,” says Glattfelder. Most were financial institutions. The top 20 included Barclays Bank, JPMorgan Chase & Co, and The Goldman Sachs Group.

So exactly who are the companies that are at the core of this “super-entity”?

Well, almost all of them are banks or financial institutions. The following is a list of the 50 “most connected” companies from the study, and the notes in parentheses are from Chris Martenson…

Are you starting to get the idea?

The global economy truly is completely dominated by banks and other financial institutions.

In the United States, the big banks are not just content to own other companies anymore. Now, some of our largest banks are actually starting to directly get into businesses such as “electric power production, oil refining and distribution, owning and operating of public assets such as ports and airports, and even uranium mining”. The following is an excerpt from a letter that several members of the U.S. Congress recently sent to Federal Reserve Chairman Ben Bernanke…

We write in regards to the expansion of large banks into what had traditionally been non-financial commercial spheres. Specifically, we are concerned about how large banks have recently expanded their businesses into such fields as electric power production, oil refining and distribution, owning and operating of public assets such as ports and airports, and even uranium mining.

Here are a few examples. Morgan Stanley imported 4 million barrels of oil and petroleum products into the United States in June, 2012. Goldman Sachs stores aluminum in vast warehouses in Detroit as well as serving as a commodities derivatives dealer. This “bank” is also expanding into the ownership and operation of airports, toll roads, and ports. JP Morgan markets electricity in California.

In other words, Goldman Sachs, JP Morgan, and Morgan Stanley are no longer just banks — they have effectively become oil companies, port and airport operators, commodities dealers, and electric utilities as well. This is causing unforeseen problems for the industrial sector of the economy. For example, Coca Cola has filed a complaint with the London Metal Exchange that Goldman Sachs was hoarding aluminum. JP Morgan is currently being probed by regulators for manipulating power prices in California, where the “bank” was marketing electricity from power plants it controlled. We don’t know what other price manipulation could be occurring due to potential informational advantages accruing to derivatives dealers who also market and sell commodities. The long shadow of Enron could loom in these activities.

You can read the rest of their letter right here.

This week, Goldman Sachs has been facing allegations that it has cost American consumers billions of dollars by manipulating the price of aluminum. The following is from an article that was posted on CNBC…

Hundreds of millions of times a day, thirsty Americans open a can of soda, beer or juice. And every time they do it, they pay a fraction of a penny more because of a shrewd maneuver by Goldman Sachs and other financial players that ultimately costs consumers billions of dollars.

The story of how this works begins in 27 industrial warehouses in the Detroit area where Goldman stores customers’ aluminum. Each day, a fleet of trucks shuffles 1,500-pound bars of the metal among the warehouses. Two or three times a day, sometimes more, the drivers make the same circuits. They load in one warehouse. They unload in another. And then they do it again.

This industrial dance has been choreographed by Goldman to exploit pricing regulations set up by an overseas commodities exchange, an investigation by The New York Times has found. The back—and-forth lengthens the storage time. And that adds many millions a year to the coffers of Goldman, which owns the warehouses and charges rent to store the metal. It also increases prices paid by manufacturers and consumers across the country.

If that sounds shady to you, that is because it is shady.

But as the big banks continue to gain even more power in our society, this kind of thing will become even more common.

So what can we do about it?

Do you think that the media will tell us the truth about all of this? I wouldn’t count on it. At this point, there are just six giant media corporations that control more than 90 percent of the news and entertainment that you see on your television. And those six giant media corporations are very hesitant to do anything that will damage their corporate owners or their corporate advertisers.

Do you think that our politicians will do anything about all of this? I wouldn’t count on it. In national elections, the candidate that raises more money wins more than 80 percent of the time. Our politicians know where their bread is buttered, and as history has shown most of them are very good to the guys with the big checkbooks.

As I said at the top of this article, money is power, and according to a report that was released last summer, the global elite have up to 32 TRILLION dollars stashed in offshore banks around the globe.

The global economy belongs to them. We are just living in it.

But hopefully if enough people start waking up, someday we will see some significant changes.

One of my favorite musical artists of all-time, Michael W. Smith, once wrote a song that contained the following lyrics…

Tell me, how long will we grovel at the feet of wealth and power?

Tell me, how long will we bow down to that golden calf, now?

(How long will be too long)

Will the people of the world ever get sick and tired of the overwhelming power of the big banks and start demanding changes?

That is a very good question. Please feel free to share what you think by posting a comment below…

Republished from: The Economic Collapse