“Insanity in individuals is something rare but in groups, parties, nations and epochs, it is the rule.” – Friedrich Nietzsche

The spoils of Africa are being divided up again…

In review of the purported attack at the Westgate mall in Nairobi, Kenya, US Africa Command (AFRICOM) head, Gen. David Rodriguez and Assistant Secretary of State for Africa, Linda Thomas-Greenfield, claim that this latest terror incident “validates” US strategy in Africa.

Assistant Secretary Thomas-Greenfield echoed Gen. Rodriguez’s thoughts following the Westgate incident, taking part in a teleconference with The US State Department and reporters:

“It highlighted to us we were pursuing the right strategy.”

The idea of AFRICOM had been in the works since November of 2000 but didn’t fully come to fruition until 2008, after former Secretary of Defense Donald Rumsfeld formed a group to establish command of the African continent in 2006. By 2007, then Secretary of Defense Robert Gates, along with former President George W. Bush, placed a plan in motion for the US AFRICOM mission.

“The United States Africa Command, in concert with other U.S. government agencies and international partners, conducts sustained security engagement through military-to-military programs, military-sponsored activities, and other military operations as directed to promote a stable and secure African environment in support of U.S. foreign policy.”

The last bit of that sentence is particularly important:

“promote a stable and secure African environment in support of U.S. foreign policy.”

It all becomes clear ounce you understand the motivations of government agencies, as they indulge in nightmare fantasies of control within their own mission statements and programs.

U.S. Special Operations Command, Africa or SOCAFRICA, was also put in place in 2008, just before the official launch of AFRICOM and was given a green light to start in October of 2009. SOCAFRICA, is the covert brand of AFRICOM and is located in the very same place as AFRICOM’s headquarters, near Stuttgart, Germany.

During the ride to hell in creating AFRICOM, the US Congress approved of a $500 million dollar counter terrorism initiative supporting countries involved in ridding themselves of Al-Qaeda terror, some of those countries included Mali and Nigeria, both of which have seen a rise in terror related activity in recent years, with the terror outfit Boko Haram.

In a recent article by geo-political analyst, Tony Cartalucci, we are given a concise breakdown of how these terror outfits are used and funded by Western interests:

“This cooperation between AQIM, Boko Haram, and Al Shabaab has been clearly bolstered by the immense influx of NATO-provided cash and weapons flowing into Libya first to overthrow the Libyan government, then to be shipped to Syria to overthrow the government there. NATO’s assistance in expanding Al Qaeda’s operational capacity in North Africa can only be helping terrorists like those behind the Kenya Westgate Mall siege carry out cross-border operations of this scale.”

That’s right, the very same command units that brought you Operation Odyssey Dawn and the NATO backed Operation Unified Protector during the takedown of Libya, through an imposed no-fly-zone, opened the door for terror outfits to control the oil-laden nation. The ousting of Muammar Gaddafi has allowed terror linked rebels to form a shadow government in Libya. Abd-Rabbo al-Barassi, the purported head of the Barqa government, was recently quoted stating the goals of his new government:

“The aim of the regional government is to share resources in a better fashion, and to end the centralized system adopted by the authorities in Tripoli.”

Barqa has the appearance of being a localized government rising up against a centralized system, however Barassi’s comments point to exactly the opposite, with his call to “share resources,” fitting in form and function to the desires of a more global centralized system.

The truth is, Libya has been embroiled in conflict since the invasion in 2011 and has continued to spiral out of control after being supposedly liberated in the aftermath of Gaddafi’s rule.

IMAGE: A war torn Libya, this appears to be an apartment complex.

During the past 150 years, Africa has been thrust into conflict, divided, enslaved and pillaged for its natural resources. Today we see the West and its allies use the guise of ‘humanitarian’ need in Africa, in order successfully secure oil contracts and other precious rare earth minerals. Through the AFRICOM mission, the military has and will be used to provide the muscle for land and resource control throughout the continent, we are witnessing an accelerated takeover through proxy wars and corrupt business deals – this is Neo-Colonialism.

North Africa to the Horn

Somalia has been ravaged by greedy oil pursuits and seemingly deliberate upheavals of violence for decades, AFRICOM, through its Western backing, has allowed for the rise in military control. As security has grown, ironically, so has the terror.

In 2012, during the London Conference On Somalia British PM David Cameron, laid out a new future of growth in the region:

“I’m delighted that Denmark, Norway, the United Arab Emirates and the Netherlands are joining us today in setting up a local stability fund, that will provide the support to previously neglected regions, including those emerging from conflict or from terrorist control.”

“We’re helping to improve transparency and accountability by establishing a joint Financial Management Board, through which donors will work with the Somali government to make sure that revenue from key assets and international aid is used for the good of Somali people.”

Watch David Cameron’s YouTube video below, calling for more aid in Somalia during the London Conference On Somalia in 2012. What Cameron won’t tell you is what financial donors get in return for generous deposits given to the oil rich region.

In 2011, the National Audit Office (NAO) and the Independent Commission for Aid Impact ((ICAI) warned that there maybe risks that could lead to fraud and corruption from aid provided by the Department For International Development (DFID). The watchdog group ICAI claimed that there was a lack of oversight in funds given to volatile regions around the world:

“Our assessment is that DFID’s current organisation of responsibilities for fraud and corruption is fragmented and that this inhibits a coherent and strategic response to this critical issue.”

Also in a report by the independent watchdog ICAI it was stated that:

“This (report) inevitably will expose the UK aid budget to higher levels of corruption risk.”

The DFID is a coalition in charge of future development in Somalia, they are a large part of the “Financial Management Board” that Cameron refered to in the 2012 conference on Somalia.

We must examine the motivations of foreign aid given to destabilized regions of the world. What kind of local compliance is expected from regions receiving aid? What do Western interests want in return and how are their funds appropriated?

In August of 2013, Soma Oil and Gas Exploration, overseen by Lord Michael Howard, a former leader of Britain’s ruling Conservative Party, orchestrated a deal with Somalia, the first such deal with an international oil company. Twelve new oil blocks have been slated for Soma under the new agreement.

Somalian oil exploration has been pursued from sometime, with Britain leading the way. Turkey, Norway, Qatar have also been clamouring for oil contracts in the region. 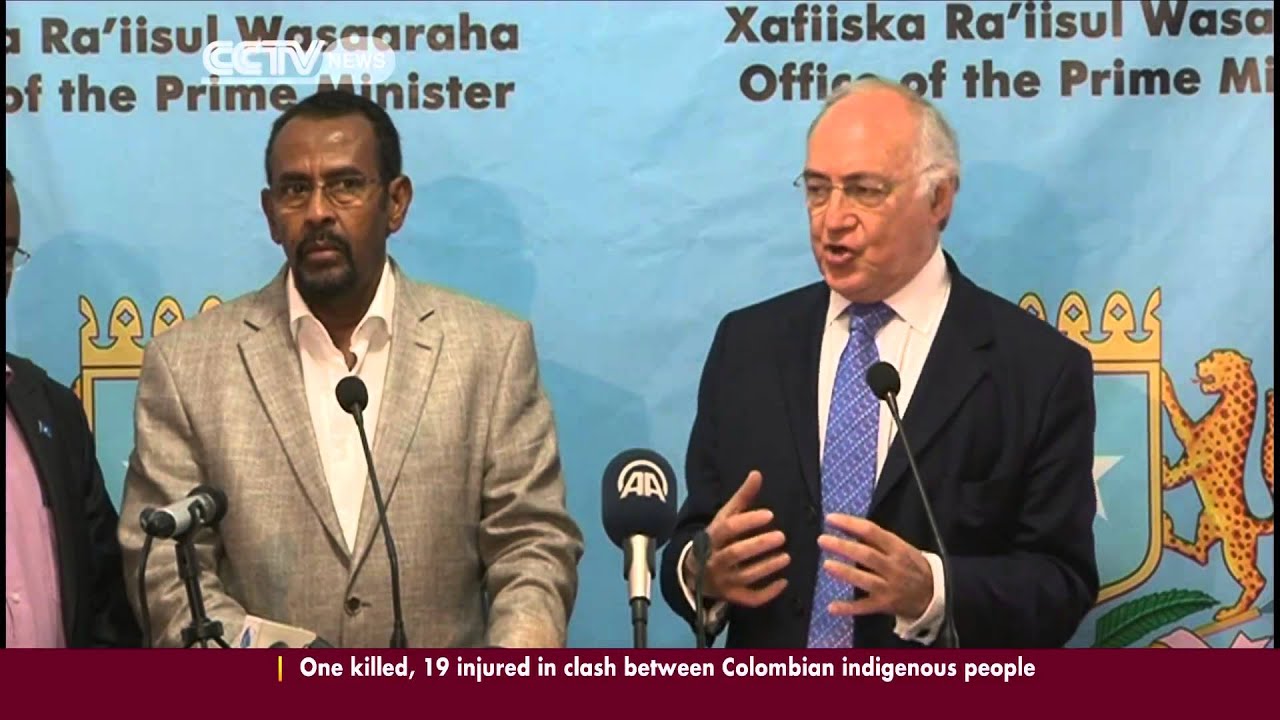 Just as new aid and oil deals are being made and an economic boom is supposedly rising in Mogadishu, Somalia’s capital, we’re told terror outfit Al-Shabab is also on the rise. How could this be, as “humanitarian aid” and the AFRICOM mission have contributed to new development in the region, opening the door for new oil trade?

Perhaps one key to this question was answered in a 21Wire article from September:

“In 2011, former US Secretary of State Hillary Clinton was apparently working with NGO’s to provide aid in Somalia but they had to work out a deal with the militant Al-Shabab because of the terror networks control over the region, so we’re told.”

The United States has expanded a licence issued by the Office of Foreign Assets Control (OFAC), to protect NGO’s who provide international aid from Anti-terror laws.

Why would they need to abruptly change this law if there wasn’t something to hide? What did Al-Shabab expect in return, for supposedly transferring aid?

Power play politics in Africa would not be complete without examining a deeper conspiracy that has sought to change the continent from within. In a YouTube video below published by swilliamism in early October, we see the inner workings of the Kenyan political climate, much of Africa has undergone many such changes in oil and mineral-laced regions.

Watch as YouTube user swilliamism investigates critical changes to Kenya’s constitution, that seemingly benefit British institutions. Some very important questions are raised in the video titled “Who’s Nudging Kenya,” with some players reaching towards the top of the UK government.

“A radical new constitution for the East African country.”

Kenya saw the first wave of a technocratic takeover in 1999, apparently spearheaded by paleontologist Richard Leakey and a government-sponsored class of technocrats from the private business sector.
After about two years this process failed to gain public backing, this led to other efforts to reform Kenya’s constitution in order to lay the ground work for technocratic control.

In the video above we see Kenya in its present state, with corporate elected technocrats, making massive reformations to their constitution and a central banking overhaul to entice more resource based businesses.

How is that a UK-based public relations firm called WPP, under the moniker of TNS International, had anything to do with the reformation of Kenya’s constitution?

Why is the British government employing the privatized Behavioural Insights Team to change policy empirically?

It appears as if the deck has been stacked against Kenya, due to British based insiders linked to Cameron’s cabinet, taking a foothold of government functions, presumably to gain easier access to precious resources.

The apparent attack in Kenya, is a door way to understanding the future of Africa