Further indication of the depraved nature of the West’s campaign against Syria, and the depraved nature of its institutions, methods, and faux-NGOs, vindicating a growing trend of ejecting Western “journalists” and NGO’s from an ever increasing number of nations, it is revealed that a French photographer recently killed in Syria was embedded with terrorist militants in Idlib, northern Syria, and was working on behalf of the US State Department’s National Endowment for Democracy (NED) funded “Reporters Without Borders.”

The UK Daily Mail revealed in their article, “French photographer killed by flying shrapnel in Syria as rebels launch fresh offensive on police academy in Aleppo,” that:

A French photographer has been killed by flying shrapnel in Syria while covering operations of an armed opposition group.

The French government said today Olivier Voisin had been working for Reporters Without Borders near the northwestern city of Idlib. 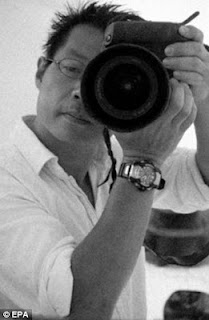 Idlib, Syria, along with much of northern Syria is admittedly overrun by Al Qaeda. In fact, a recent Washington Post article stated that northern Syria was so overrun with Al Qaeda, that Western nations along with its Arab partners have decided to ship weapons in from Daraa in southern Syria. Of course, Daraa too is a long-time hotbed for extremist activity, including Al Qaeda, years before the so-called “uprising” even began.

The Post article titled, “In Syria, new influx of weapons to rebels tilts the battle against Assad,” admits:

A surge of rebel advances in Syria is being fueled at least in part by an influx of heavy weaponry in a renewed effort by outside powers to arm moderates in the Free Syrian Army, according to Arab and rebel officials.

The new armaments, including anti-tank weapons and recoilless rifles, have been sent across the Jordanian border into the province of Daraa in recent weeks to counter the growing influence of Islamist extremist groups in the north of Syria by boosting more moderate groups fighting in the south, the officials say.

Despite the rampant extremism in the north, French photographer Olivier Voisin found himself amongst these very militants in the midst of what we are told are waves of “rebel gains.” Apparently these “gains” are being made at high costs.

Voisin’s organization, Reporters Without Borders, is a notorious faux-NGO that plays a pivotal role globally, undermining nations targeted by Western corporate-financier interests, working in tandem with US State Department-backed proxies in Iran, China, Russia, Sudan, and everywhere else Wall Street and London seek to plant their flag. In 2008, Reporters Without Borders received cash from the State Department-funded National Endowment for Democracy (NED) whose board of directors is a who’s who of warmongering Neo-Conservatives and corporate special interests.

While these corporate-financier interests constitute the antithesis of “human rights,” “human freedom,” and “democracy,” these very principles are used to leverage advantages and invoke public sympathy and support for subversion and regime change in targeted nations.

Reporters Without Borders also received cash from the Sigrid Rausing Trust, the Overbrook Foundation, and the US State Department’s Washington DC-based “Center for a Free Cuba.” It should be noted that the Sigrid Rausing Trust also provides funding for the International Crisis Group (ICG) (along with BP, Chevron, Shell, Deutsche Bank Group, and Morgan Stanley) who in part helped blueprint and cheerlead the violence that ultimately claimed Voisin’s life. In fact, the ICG includes amongst its board of directors, Kofi Annan who helped buy time for NATO militants to rearm and redeploy with a disingenuous “peace plan.”

And as Syria’s government and people fight against Al Qaeda militants coddled, armed, and funded by NATO, admittedly based in Turkey side-by-side US-provided Patriot missile batteries, CIA agents, as well as French and British special forces, the Western corporate-media seems only able to condemn Voisin’s death along with unconfirmed, most likely fabricated accounts made by militants that Syria is firing “Scud missiles” into Aleppo. This, while confirmed, deadly car bombings bearing all of Al Qaeda’s hallmarks killed scores of civilians in Damascus, and was promptly excused, dismissed, and buried by the West. In fact, the US is blocking a UN resolution that would condemn the most recent Al Qaeda bombing in Damascus which claimed over 50 lives including school children.

The runaway depravity of the West, its governments, institutions, media, and faux-NGO’s are permanently disfiguring any potential concept of “international law” and has left the people of the West with a floundering legitimacy that will inevitably impact all other aspects of their life, not merely foreign policy. Criminal foreign policy is just one of many symptoms of a corrupt, corporate-financier dominated ruling oligarchy that has hijacked the institutions, charters, and social contracts that bind together a functional society. The solution is to boycott and ultimately replace these corporate-financier monopolies, by creating and cultivating local institutions that directly serve the interests of the people.