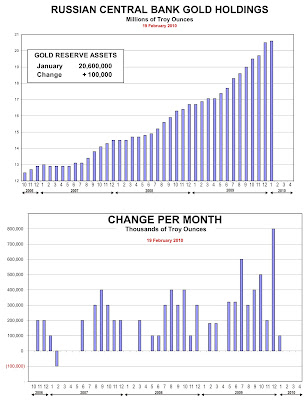 Originally published in June 2011. Both countries have recently been increasing their gold stocks.

There is evidence that central banks in several regions of the World are building up their gold reserves. What is published are the official purchases.

A large part of these Central Bank purchases of gold bullion are not disclosed. They are undertaken through third party contracting companies, with utmost discretion.

US dollar holdings and US dollar denominated debt instruments are in effect being traded in for gold, which in turn puts pressure on the US dollar.

In turn, both China and Russia have boosted domestic production of gold, a large share of which is being purchased by their central banks:

It has long been assumed that China is surreptitiously building up its gold reserves through buying local production. Russia is another major gold miner where the Central bank has been purchasing gold from another state entity, Gokhran, which is the marketing arm and central repository for the country’s mined gold production. Now it has been reported by Bloomberg that the Venezuelan Central Bank director, Jose Khan, has said that country will boost its gold reserves through purchasing more than half the gold produced from its rapidly growing domestic gold mining industry.

In Russia, for example, Gokhran sold some 30 tonnes of gold to the Central Bank in an internal accounting exercise late last year. In part, so it was said at the time, the direct sale was made rather than placing the metal on the open market and perhaps adversely affecting the gold price.

China is currently the world’s largest gold producer and last year it confirmed it had raised its own Central Bank gold holdings by more than 450 tones over the previous six years. Mineweb.com – The world’s premier mining and mining investment website Venezuela taking own gold production into Central Bank reserves – GOLD NEWS | Mineweb

The 450 tons figure corresponds to an increase in the gold reserves of the central bank from 600 tons in 2003 to 1054 tons in 2009. If we go by official statements, China’s gold reserves are increasing by approximately 10 percent per annum.

China has risen to now be the largest gold producing nation in the world at around 270 tonnes. The amount bought in by the government initially looks like 90 tonnes per annum or just under, 2 tonnes a week. Before 2003 the announcement by the Chinese central bank that gold reserves had been doubled to 600 tonnes, accounted for similar purchases before that date. Why so small an amount you may well ask? We think local and national issues clouded the central bank’s view as it was the government that bought the gold since 2003 and have now placed it on the central bank’s Balance Sheet. So we would conclude that the government has ensured central bank gold purchasing must continue. “How will Chinese Central Bank Gold Buying affect the Gold Price short & Long-Term?” by Julian Phillips. FSO Editorial 05/07/2009

Russia’s Central Bank reserves have increased markedly in recent years. The RCB reported in May 2010 purchasing 34.2 tons of gold in a single month. Russian Central Bank Gold Purchases Soar In May – China Too? | The Daily Gold

The diagram below shows a significant increase in monthly purchases by the the RCB since June 2009.

Central Banks in the Middle East are also building up their gold reserves, while reducing their dollar forex holding.

Gold reserves of GCC states is less than 5 percent:

Despite a high interest in gold, GCC states maintain less than 5 percent of their total reserves in gold. Compared to the ECB, which holds 25 percent of reserves in gold, that leaves a lot of room for growth. http://www.businessinsider.com/gcc-boost-gold-holdings-2010-12#ixzz18FEqpTy3

GCC states should boost their foreign reserve holdings of gold to help shield their billions of dollars of assets from turbulence in global currency markets, say economists at the Dubai International Financial Centre Authority (DIFCA).

Diversifying more of their reserves from US dollars to the yellow metal would help to offer central banks in the region higher investment returns, said Dr Nasser Saidi, the chief economist of DIFCA, and Dr Fabio Scacciavillani, the director of macroeconomics and statistics at the authority.

“When you have a great deal of economic uncertainty, going into paper assets, whatever they may be – stocks, bonds, other types of equity – is not attractive,” said Dr Saidi. “That makes gold more attractive.”

Declines in the dollar during recent months have dented the value of GCC oil revenues, which are predominantly weighted in the greenback. GCC urged to boost gold reserves

According to a report in People`s Daily;

The latest rankings of gold reserves show that, as of mid-December, the United States remains the top country and the Chinese mainland is ranked sixth with 1,054 tons of reserves, the World Gold Council announced recently.

Russia climbed to eighth place because its gold reserves increased by 167.5 tons since December 2009. The top ten in 2010 remains the same compared to the rankings of the same period of last year. And Saudi Arabia squeezed to the top 20.

Developing countries and regions, including Saudi Arabia and South Africa, have become the main force driving the gold reserve increase. … .

It should be understood that actual purchases of physical gold are not the only factor in explaining the movement of gold prices. The gold market is marked by organized speculation by large scale financial institutions.

The gold market is characterised by numerous paper instruments, gold index funds, gold certificates, OTC gold derivatives (including options, swaps and forwards), which play a strong role, particularly in short-term movement of gold prices. The recent increase and subsequent decline of gold prices are the result of manipulation by powerful financial actors.