While much has been made recently of Ireland’s exit from the punishing EU/IMF bailout programme, Michael Noonan, the Finance Minister, has welcomed post-bailout ‘surveillance’. Dutch Finance Minister Jeroen Dijsselbloem, said Ireland would be subjected to ‘intensive surveillance’ “twice a year, but this would involve monitoring as supposed to new measures being imposed” because “under new European budgetary rules, countries leaving a bailout will be subject to extra attention until at least 75pc of the money owed is repaid.”[2]

The Taoiseach (Prime Minister), Enda Kenny, has even gone so far as to state that Ireland would exit the bailout without the safety net of a credit line. Unfortunately for him Ireland’s economic crisis will not go away that easily. The economic consequences of the bailout may be about to bounce back and hit him in the face. Interest repayments are already taking a huge chunk out of the economy and the Irish people will be paying back EU [EFSF and EFSM] loans until 2042 and IMF loans until 2023. A fundamental economic crisis is in the making.

Even the somewhat positive projections for 2014 show that all the money to be borrowed, €8.3bn, is to be spent on interest repayments.

This gradual slowing down of the economy is having knock-on effects as less money going into the economy is leading people to spend less, which is causing businesses to close leading to more unemployment and so on. Figures published by the CSO [Central Statistics Office] show that “of the 812 firms declared insolvent in 2013, some 559 were liquidated while 243 entered receivership. The remaining 10 went into examinership.”[3]

While this rate of insolvency is down somewhat on last year the devastation can be seen with boarded-up shops in every town in Ireland. The decline in retail sales and consumer confidence from the years 2005 – 2013 is illustrated in the following table:

The depth of the economic crisis is most evidenced by the number of residential mortgages in arrears. A recent Central Bank of Ireland report showed that “the level of mortgage arrears in Ireland has almost quadrupled since 2009 and totaled €18.6 billion at the end of June this year [2013]” and that “those in arrears of two years or more now account for one-third of this total.” [4]

This was stated to be a source of “serious concern” for the Central Bank of Ireland yet Troika-imposed conditions to fast-track property repossessions seems to be the government’s main answer to a problem which has deep historical reverberations in Ireland. The extent of the problem in Ireland is clearly shown in a European context with the following graph: 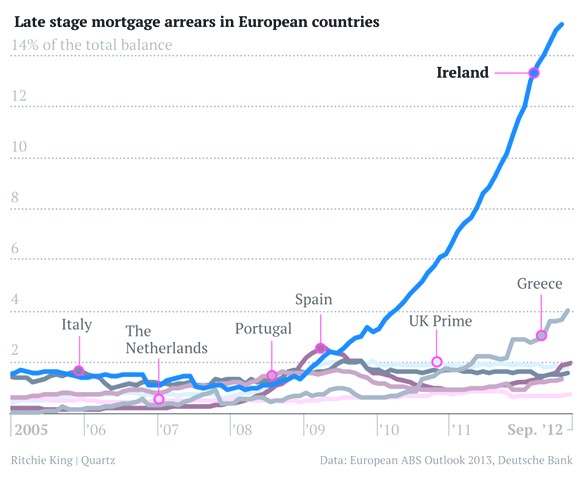 So where did all the money borrowed go to? Recent statistics show that ‘Rest of the World Residents’ have largely been paid off while “Irish residents have seen their holdings of Irish bank bonds rise from €25 billion at the time of the guarantee to €45 billion in April 2010. The proportion of bond held by Irish residents has been rising since the guarantee was introduced and now stands at just over 50%. Are we going to burn ourselves?”[5] [See table below] This means there will be no more talk of burning the bondholders as Irish elites have an interest in ensuring the continuation of government austerity policies. 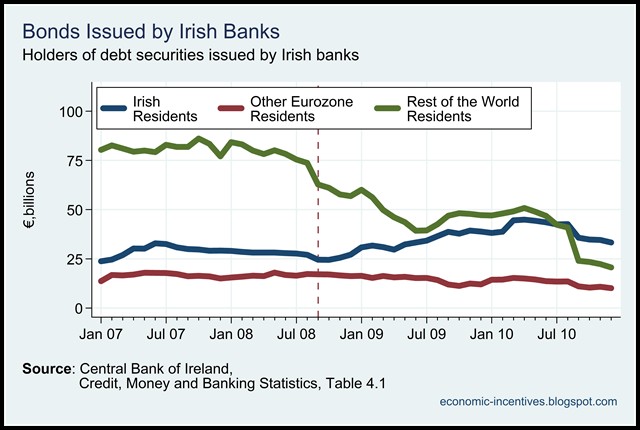 What does all this mean? A perfect storm is brewing as Irish people, already getting further and further in debt, will be pushed into new taxes (property, water etc) to fund growing interest repayments while the EU watches ‘on until at least 75pc of the money owed is repaid.’

At the same time decreasing capital expenditure, decreasing sales and growing unemployment will reduce the tax base even further implying further cutbacks to keep up repayments of bonds and interest.

As it is, the effect of cutbacks on public services is reaching boiling point and with the promise of worker resistance in the offing, the government may soon be forced into a reconsideration of the easy ride it has had so far from the Irish people.

For more information, graphs and tables on the Irish economy see: http://gaelart.net/economics.html

Caoimhghin Ã“ CroidheÃ¡in is a prominent Irish artist who has exhibited widely around Ireland. His work consists of paintings based on cityscapes of Dublin, Irish history and geopolitical themes (http://gaelart.net/). His blog of critical writing based on cinema, art and politics along with research on a database of Realist and Social Realist art from around the world can be viewed country by country at http://gaelart.blogspot.ie/.