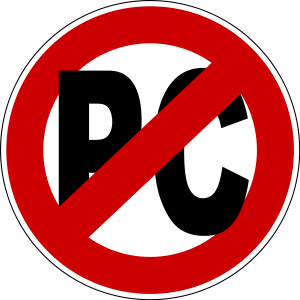 If you say the “wrong thing” in America today, you could be penalized, fired or even taken to court. Political correctness is running rampant, and it is absolutely destroying this nation. In his novel 1984, George Orwell imagined a future world where speech was greatly restricted. He called that the language that the totalitarian state in his novel created “Newspeak”, and it bears a striking resemblance to the political correctness that we see in America right now. According to Wikipedia, Newspeak is “a reduced language created by the totalitarian state as a tool to limit free thought, and concepts that pose a threat to the regime such as freedom, self-expression, individuality, peace, etc. Any form of thought alternative to the party’s construct is classified as ‘thoughtcrime.’” Yes, people are not usually being hauled off to prison for what they are saying just yet, but we are heading down that path. Every single day, the mainstream media in the United States bombards us with subtle messages about what we should believe and what “appropriate speech” consists of. Most of the time, most Americans quietly fall in line with this unwritten speech code. In fact, most of the time we enforce this unwritten speech code among each other. Those that would dare to buck the system are finding out that the consequences can be rather severe. The following are 19 shocking examples of how political correctness is destroying America…

#1 The Missouri State Fair has permanently banned a rodeo clown from performing just because he wore an Obama mask, and now all of the other rodeo clowns are being required to take “sensitivity training“…

But the state commission went further, saying it will require that before the Rodeo Cowboy Association can take part in any future state fair, “they must provide evidence to the director of the Missouri State Fair that they have proof that all officials and subcontractors of the MRCA have successfully participated in sensitivity training.”

#2 Government workers in Seattle have been told that they should no longer use the words “citizen” and “brown bag” because they are potentially offensive.

#3 A Florida police officer recently lost his job for calling Trayvon Martin a “thug” on Facebook.

#4 “Climate change deniers” are definitely not wanted at the U.S. Department of the Interior. Interior Secretary Sally Jewell was recently quoted as making the following statement: “I hope there are no climate-change deniers in the Department of Interior”.

#5 A professor at Ball State University was recently banned from even mentioning the concept of intelligent design because it would supposedly “violate the academic integrity” of the course that he was teaching.

#6 The mayor of Washington D.C. recently asked singer Donnie McClurkin not to attend his own concert because of his views on homosexuality.

#7 U.S. Senator Chuck Schumer is calling on athletes marching in the opening ceremonies at the Winter Olympics in Sochi next year to “embarrass” Russian President Vladimir Putin by protesting for gay rights.

#8 Chaplains in the U.S. military are being forced to perform gay marriages, even if it goes against their personal religious beliefs. The few chaplains that have refused to follow orders know that it means the end of their careers.

Transgendered students in California will now have the right to use whichever bathrooms they prefer and join either the boys’ or girls’ sports teams, thanks to landmark legislation signed by Democratic Gov. Jerry Brown on Monday.

The law amends the state’s education code, and stipulates that each student will have access to facilities, sports teams, and programs that are “consistent with his or her gender identity,” rather than the student’s actual biological composition. A male student who self-identifies as female could therefore use the girls’ bathroom, even if he is anatomically male.

#10 In San Francisco, authorities have installed small plastic “privacy screens” on library computers so that perverts can continue to exercise their “right” to watch pornography at the library without children being directly exposed to it.

#11 In America today, there are many groups that are absolutely obsessed with eradicating every mention of God out of the public sphere. For example, an elementary school in North Carolina ordered a little six-year-old girl to remove the word “God” from a poem that she wrote to honor her two grandfathers that had served in the Vietnam War.

#12 A high school track team was disqualified earlier this year because one of the runners “made a gesture thanking God” once he had crossed the finish line.

#13 Earlier this year, a Florida Atlantic University student that refused to stomp on the name of Jesus was banned from class.

#14 A student at Sonoma State University was ordered to take off a cross that she was wearing because someone “could be offended“.

#15 A teacher in New Jersey was fired for giving his own Bible to a student that did not own one.

#16 Volunteer chaplains for the Charlotte-Mecklenburg Police Department have been banned from using the name of Jesus on government property.

#17 According to a new Army manual, U.S. soldiers will now be instructed to avoid “any criticism of pedophilia” and to avoid criticizing “anything related to Islam”. The following is from a Judicial Watch article…

The draft leaked to the newspaper offers a list of “taboo conversation topics” that soldiers should avoid, including “making derogatory comments about the Taliban,” “advocating women’s rights,” “any criticism of pedophilia,” “directing any criticism towards Afghans,” “mentioning homosexuality and homosexual conduct” or “anything related to Islam.”

#18 The Obama administration has banned all U.S. government agencies from producing any training materials that link Islam with terrorism. In fact, the FBI has gone back and purged references to Islam and terrorism from hundreds of old documents.

#19 According to the Equal Employment Opportunity Commission, it is illegal for employers to discriminate against criminals because it has a “disproportionate” impact on minorities.

It would be hard to overstate the power that all of this relentless “thought training” has on all of us. And young people are particularly susceptible to the power of suggestion. If you doubt this, just check out this video of a little boy praying to Barack Obama as if he was a deity…

It would be a huge mistake to underestimate the power of the mainstream media in America today. As I mentioned the other day, Americans watch an average of about 153 hours of television a month. When Americans go to work or go to school, the conversations that they have with others are mostly based on content that the media feeds them. And about 90 percent of what we watch on television is controlled by just six gigantic corporations.

But the media is not the only source that is telling us what to think. The truth is that the messaging that comes from all of our major institutions (the government, the media, the education system, etc.) is remarkably consistent. The establishment wants to control what we say and how we think, and they have a relentless propaganda machine that never stops working.

The way that we all see the world has been greatly shaped by the thousands of hours of “thought training” that we have all received over the years. Understanding what is being done to us is the first step toward breaking free.

Republished from: The American Dream